Marcus Stoinis has been deemed fit for the contest.

Midway through the 2019 World Cup, England found themselves in a bit of trouble with back-to-back defeats. However, Eoin Morgan & Co notched victories against India and New Zealand to secure a berth in the semi-final. After finishing third on the points table, the Three Lions are scheduled to play the second semi-final of the tournament versus the Aussies on July 11 at the Edgbaston in Birmingham.

The Men in Yellow, on the other hand, missed a chance of topping the points table, losing to an out-of-form South Africa at the Old Trafford. But for a chunk of the main round, Aaron Finch’s men were dominant, winning seven out of their nine games. Moreover, Australia beat the Brits twice in the mega event, first in the warm-up game and then at the iconic Lord’s and both times they successfully defended targets.

The weather forecast for tomorrow’s game isn’t promising by any means. There are chances of rain and the clouds will be over the venue throughout the entire duration of the encounter. There’s a chance of a curtained contest. The temperature will be in between 19 degrees Celsius and 23 degrees Celsius. The humidity will be in the 60s and 80s during game time.

The pitch at the Edgbaston has overall been an excellent strip for batting. But the spinners have also extracted purchase from the stip. Two out of four matches in the league stage were won by the team, batting first. The chasing team won twice, but the games went close. Bering in mind that both teams have strained while chasing, it won’t be a surprise, if the sides opt to field first.

The Aussies are likely to go with Marcus Stoinis, who complained off a back injury in the previous game. Justin Langer, the head coach, gave confirmation about the same. Langer also said that Peter Handscomb, who came in place of Shaun Marsh, is ‘definitely in’ for the match. Handscomb will replace southpaw Usman Khawaja, who has been ruled out of the tournament owing to a hamstring injury.

A lot would depend on how Warner and Finch step up and deliver. The onus will also be on Steve Smith in Khawaja’s absence. Maxwell has looked dangerous but is yet to play a knock of substance. Carey has simply been outstanding with an average and strike-rate of 65.80 and 113.44. Mitchell Starc remains the key component of the bowling with Cummins, Behrendorff and Lyon as the other specialists.

The Brits may retain their eleven from their victory versus the Kiwis. After the injury layoff, Jason Roy has shown tremendous form with scores of 66 and 60. Jonny Bairstow wasn’t at his best earlier, but the consecutive tons would boost his confidence to a significant level. Joe Root remains to be a fulcrum of the batting with 500 runs. He couldn’t get going last time around and would want a big score.

Barring the 148 versus Afghanistan, Eoin Morgan has been far from his very best. Ben Stokes has chipped in most times, having gotten 381 runs with four half-centuries. Jos Buttler has a strike-rate of 130.41 but needs to show a bit more consistency. In the bowling department, Mark Wood and Jofra Archer have been amongst the wickets. Plunkett, Rashid and Woakes need to lend them support. 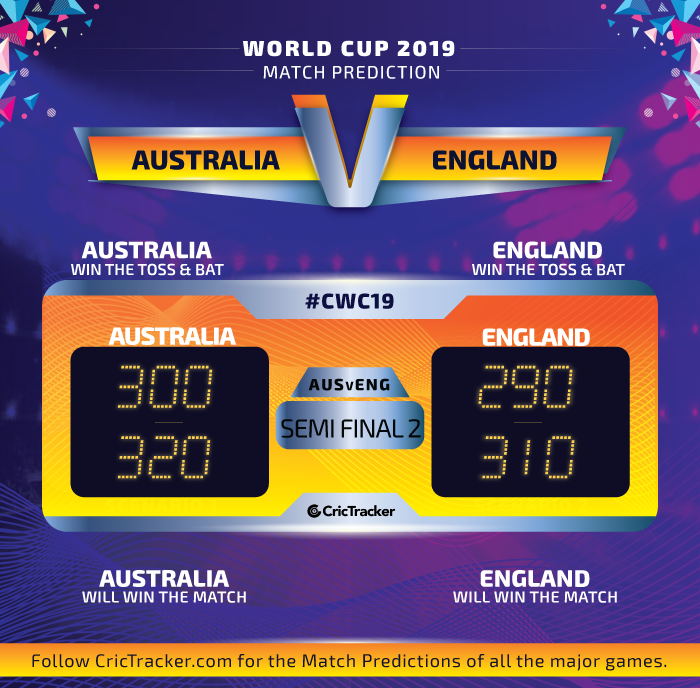