Ravindra Jadeja has missed out in the fans' World Cup squad.

The excitement among the fans is at its peak as the Indian squad for the upcoming World Cup is set to be announced at 3.30 PM today. While the former cricketers are busy picking their own squad for the tournament, even the fans are having their say on various social media platforms. Certain names look set to be picked in the squad while there is a lot of argument going on for a couple of spots.

The number four spot is one of those and all hell will definitely break loose once the squad is announced. Ambati Rayudu was being looked at as the perfect option a few months ago. But his form went downhill in the last couple of series which India played and the hunt once again started. Vijay Shankar popped up as another option for that spot and the fans have agreed on both the players to be picked in the squad.

The popular choice among the fans for the back-up wicket-keeper is Rishabh Pant despite the fact that the youngster hasn’t done much in India colours. Dinesh Karthik doesn’t seem to be in the radar of the fans. The Tamil Nadu cricketer has a calm head over his shoulders and it remains to be seen if he gets picked in the final squad. Only one of them will be selected and either way, it will be a heartbreak for one of them.

Hardik Pandya has to be there in any team at the moment but Ravindra Jadeja has unfortunately missed out. The fans are happy with only a couple of spin options in the squad with the tournament to be played in England. Even Kedar Jadhav can roll his arm if required and has done a great job so far.

The fans haven’t argued much in terms of the pace department and the pace trio of Bhuvneshwar Kumar, Mohammed Shami and Bhuvneshwar walk into the team for them. While all these are deliberations, the selection committee led by MSK Prasad will soon announce the final squad. 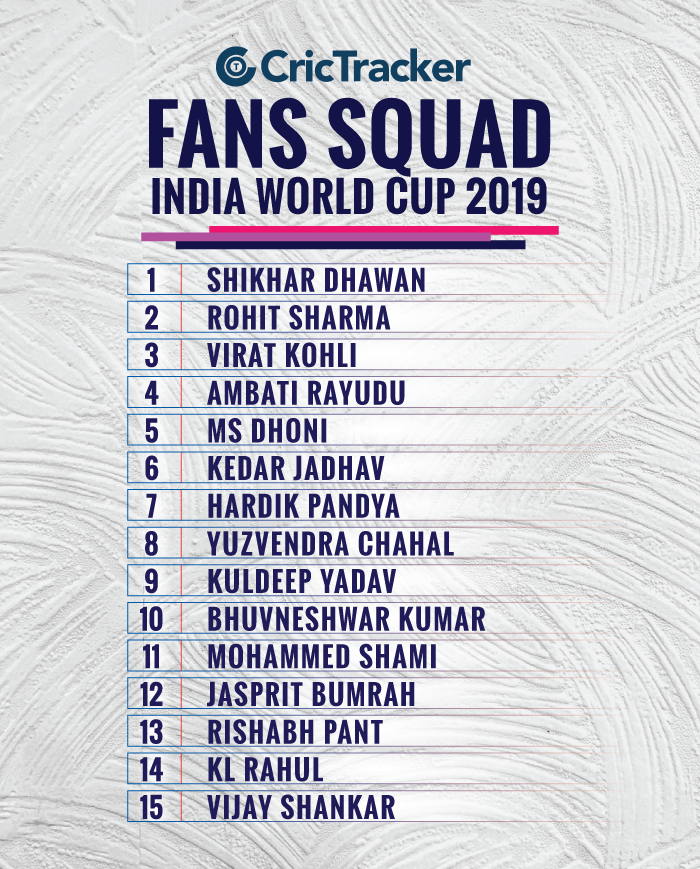