The tournament has been a nightmare for both the teams.

The 2019 edition of the World Cup hasn’t turned out to be a happy one for Pakistan and South Africa. Both teams have won one game each and lost three, owing to which they are gasping for breath in the bottom half of the points table. The Proteas are at a bit of disadvantage, having played one extra game. The two sides are now scheduled to lock horns on Sunday at the iconic Lord’s in London.

Pakistan has only got the better of England and nothing apart from that has gone right for them. Their defeat at the hands of India has left their campaign in the doldrums. From now on, they can’t afford to be complacent. South Africa gave New Zealand a run for their money, but Kane Williamson robbed them of a victory. Faf du Plessis and Co are now in a must-win scenario for their last three encounters.

There is a slight chance of rain in tomorrow’s game, but it’s not threatening and an uninterrupted match can be expected. There will be a 70 per cent cloud cover though, but it’s not something to worry about. The temperature will hover in between 18 degrees Celsius and 23 degrees Celsius. The humidity will be in the 50s and 60s during game time.

The venue will be hosting its first match of the mega event. Only 26 of the 58 completed ODIs went in favour of the team, batting first. Even out of the last five One-Dayers, the chasing team has come out trumps three out of five times. The average score in those games was 288 and it suggests that the next encounter may not be an overly high-scoring affair.

Pakistan may wish to bring in Haris Sohail in place of the experienced Shoaib Malik, who has been ridiculously out of touch. Malik has already bagged a couple of ducks out of the three matches he has played in. The young Mohammad Hasnain may well be tried out in Hasan Ali’s place. Hasan has got only a couple of wickets in the tournament at an average of 128 and an economy of 7.75.

Wahab Riaz has bowled with pace but has blown hot and cold. The onus will again be on Mohammad Amir to get the crucial breakthroughs. The Men in Green’s batting is yet to fire on all cylinders. Babar Azam and Mohammad Hafeez have looked the most accomplished. Fakhar Zaman must have gained some confidence after he got 62 in the previous encounter.

The Proteas may not want to change their eleven despite the defeat. Quinton de Kock has strained while facing quality pace attacks and he’ll be keen to get a substantial score. Hashim Amla has got two decent knocks under his belt and that would keep him in good stead. Faf du Plessis hasn’t been amongst the runs in the last few games and that’s becoming a worrying factor for South Africa.

Rassie van der Dussen has undoubtedly been their best bet with the bat and he’ll be looking to carry his good form. In the bowling department, Lungi Ngidi looked sharp after returning from the injury layoff. Kagiso Rabada has picked up six wickets, but he’s yet to put forth his A-game. Imran Tahir and all-rounder Chris Morris have looked impressive with 8 and 9 wickets respectively. 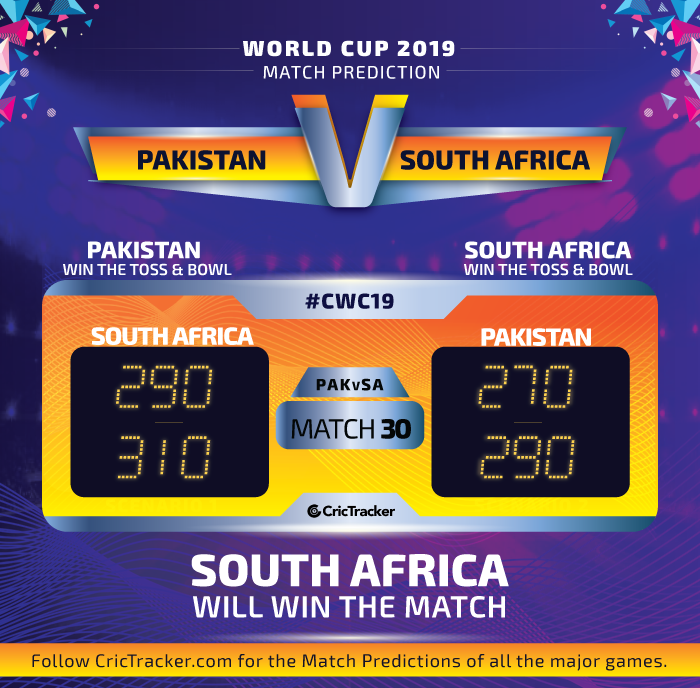