The Caribbean team last beat the Men in Blue in the World Cup way back in 1992 in Wellington.

After a few resounding wins, Team India was given a run for their money by Afghanistan in Southampton. However, Virat Kohli and Co won the game by 11 runs. More than their batting, it’s the bowlers, who have put forth a collective effort owing to which the Men in Blue are unbeaten in the World Cup. They are next scheduled to lock horns with Jason Holder’s Windies on June 27 at the Old Trafford in Manchester.

The Caribbean team, on the other hand, has gone into a slump after their seven-wicket win over Pakistan at the Trent Bridge in Nottingham. Carlos Brathwaite almost pulled off a spectacular triumph versus New Zealand in Manchester itself. The Windies are still in with a glimmer of a hope to make the semis, but for that to happen, a lot of permutation and combinations need to work in their favour.

First and foremost, there are no chances of rain on Thursday, which means that an uninterrupted game is on the cards. There won’t be a whole lot of cloud cover and the sun will be shining bright. The temperature will be around 18 and 23 degrees Celsius, making it a pleasant atmosphere for cricket. The humidity won’t be high with the numbers ranging in the 50s and 60s.

Three matches have been played at this venue thus far and, all the games went in favour of the team, batting first. The track in Manchester is an excellent one for batting and bowlers can’t afford to err with their line and lengths. Striking with the new leather becomes that much crucial in that case. For the time being, it will be wise to win the toss and then opt to bat as runs on the board can hardly go wrong.

Evin Lewis pulled his hamstring while fielding in the last game and came out to bat at number eight. If he doesn’t get fit, then Sunil Ambris is likely to get a look in. Ambris came in as Andre Russell’s replacement. Ambris has been in good form, having gotten his highest ODI score of 148 against Ireland last month. Chris Gayle and Shai Hope are most likely to open if Lewis misses the encounter.

Carlos Brathwaite with his knock against the Kiwis showed how dangerous he can be provided they blend caution with hostility. In the bowling department, Sheldon Cottrell has given early breakthroughs to his team on almost all occasions. Oshane Thomas has also spit venom, trying to use the bouncer to good effect. Kemar Roach and Ashley Nurse are yet to get a wicket and they need to step up.

Even after the scare against the Afghans, India would not want to tinker with their combination. KL Rahul hasn’t blazed away but has looked determined in the middle, opening that batting. Rohit Sharma succumbed to his first failure of the tournament, failing to read Mujeeb Ur Rahman, and he’ll yearn to make amends. Virat Kohli scored 67 in the last game on a tough wicket but a player with his conversation abilities stopping short of a century is a disappointment.

Kedar Jadhav, scoring a gutsy half-century in trying conditions, is also a positive sign for the Indian team. MS Dhoni and Vijay Shankar are yet to flourish with the bat in hand. In the bowling department, the onus will be on Bumrah and Shami to tangle the batsmen with their pace and variations. The spin-bowling duo of Chahal and Kuldeep are key components as well. Not to undermine Hardik Pandya- the bowler.

The prediction is for India to continue with their unbeaten run in the World Cup. 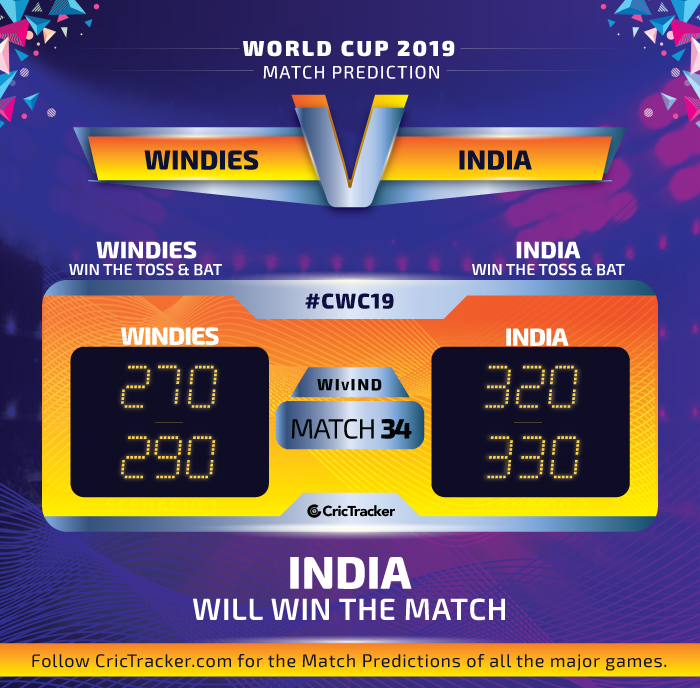