Aftab Alam has been sent back home in 'exceptional circumstances' and he has been replaced by Sayed Shirzad.

After a disastrous run in the first half of the 2019 World Cup, the Pakistan team has started to wreak havoc. After knocking out South Africa from the mega event, Sarfaraz Ahmed and Co ended New Zealand’s unbeaten streak in the tournament at the Edgbaston in Birmingham. The Men in Green have parked aside the disappointment and have started punching above their weights. However, they are yet to drag themselves out of jail.

Pakistan is next scheduled to face Afghanistan at the Headingley in Leeds and it’s known that the side can’t afford to put a foot wrong. They lost to the same opposition in the warm-up stage a month ago, but this Pakistan team is a confident unit after back-to-back victories. The Afghans are still searching for their first victory of the World Cup and they need to pull out something special if they are to get over the line in the next encounter.

First and foremost, there are no chances of rain for the first of tomorrow’s doubleheader. There will be 46 per cent cloud cover, but the sun will also be there throughout game. Pakistan definitely won’t want rain to play spoilsport in their must-win encounter. The temperature will hover around 20 and 28 degrees Celsius. The humidity will start in the 70s, but will come down to the 50s as the game progresses.

The track in Leeds isn’t expected to be a belter for batting. In the only game played here in the mega event, the strip assisted the spinners. The deck is also expected to slow down as the match goes by. Both Pakistan and Afghanistan have quality spinners in their repertoire and hence, they should ideally opt to bat first after winning the toss. Then they can put pressure on the opposition batting with their spin-attack.

Pakistan is unlikely to change their winning combination from the last game. Babar Azam and Haris Sohail are in jaw-dropping form and the duo needs to carry this forward for the team to continue its dream run. There is a bit of concern over Imam-ul-Haq and Fakhar Zaman’s returns. Both the batters have looked promising with some scorching strokes in the powerplay. But none has been able to play a big knock thus far.

Mohammad Hafeez should focus on not giving his wicket to part-time spinners after getting his eyes in. In the bowling department, Shaheen Shah Afridi’s return to form is a massive breather for the team. Even Shadab Khan is starting to get amongst the wickets. Imad Wasim is yet to pick up a wicket, but he is Pakistan’s most economical bowler. Amir and Wahab also need to keep bowling with ferocity.

The Afghans don’t have many alternatives from which they can choose. Dawlat Zadran has looked a tad rusty in the last couple of games and left-arm seamer Sayed Shirzad can be included in his place. Shirzad was roped in as a replacement for Aftab Alam, who has been sent back home ‘in exceptional circumstances’ after breaching ICC’s disciplinary code of conduct. Samiullah Shinwari will also retain his place after his 49*.

Gulbadin Naib has done well with the bat, but he needs to learn how to rotate the strike when the boundaries are hard to come by. Hashmatullah Shahidi and Rahmat Shah, two of their most reliable batters, need to be on top of the games. A lot will also depend on how Asghar Afghan, Mohammad Nabi and Najibullah Zadran deliver. Mujeeb has done exceptionally thus far, especially with the new ball. Rashid needs to be a bit more penetrative. 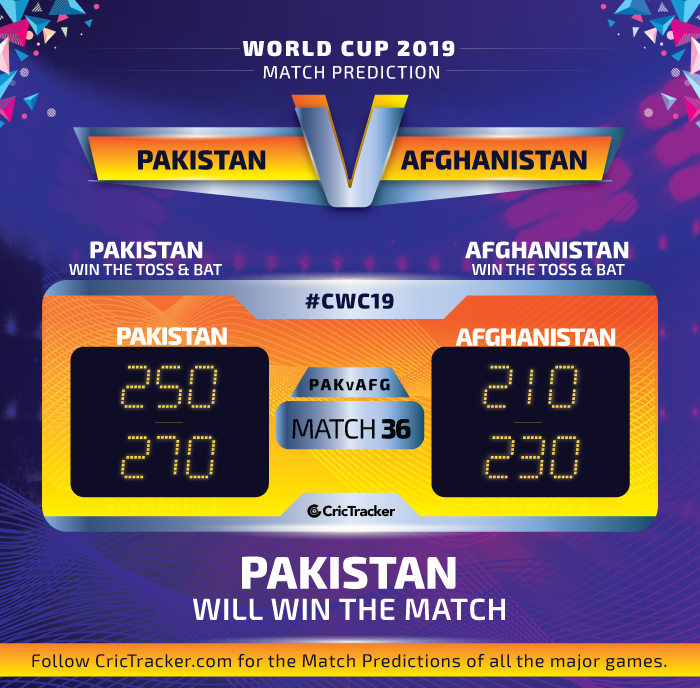