On head-to-head count, Lanka has beaten the Caribbean team two times out of six matches.

After their inspiring victory versus hosts England, Sri Lanka surrendered quite meekly against South Africa, losing the game at the Riverside Ground in Chester-le-Street by nine wickets. Dimuth Karunaratne & Co. are currently placed seventh on the points table with six points from seven matches. Their next two league games are must-win ones in order to progress to the semis of the event.

The Islanders are next scheduled to lock horns with Windies in Chester-le-Street. The Caribbean team is low on confidence and is languishing at the ninth position of the points table with three points. It’s been one month since Jason Holder and Co won their last World Cup match versus Pakistan in Nottingham. Even as the Windies will be playing for pride, Lanka is expected to strain every sinew in the game.

There is a slight chance of rain during game time, but it’s as less as zero. There will be 70 per cent cloud cover and the sun won’t make its presence felt. The Lankans won’t want the rain to play spoilsport as an abandoned game will dash their hopes of playing the semis. The temperature will be around 18 degrees Celsius. The humidity will be in the 50s and 60s throughout.

The pitch in Chester-le-Street is expected to be good for batting and won’t be any different next time around, provided another deck isn’t used. But it has something for the fast bowlers if they bend their backs. The Windies have had their difficulties in run-chases and even the Lankans won both their match while defending totals. Hence, it won’t be a surprise, if the teams opt to bat first.

The Lankans have persisted with Jeevan Mendis despite him floundering with both bat and ball. Jeffrey Vandersay, another leg-spinning option in their ranks, can be tried out. Their batting has been inconsistent, to say the least. Karunaratne, their best bet with the willow, didn’t get runs in the last two matches. Kusal Perera has looked promising but needs to play a knock of substance.

Angelo Mathews got back to form versus the Proteas but then faltered in the very next game. Kusal Mendis has been getting starts but hasn’t converted any of them. In the bowling department, Lasith Malinga has been their standout performer with nine wickets, including a four-wicket haul. Suranga Lakmal has been disappointing as he is yet to pick up a wicket in the tournament.

The Caribbean team is likely to bring in spinner Ashley Nurse in place of Fabian Allen. The same is for the reason that the Lankan lineup has a number of left-handers. Chris Gayle has a couple of the fifties, but apart from that, has looked a tad clueless. Sunil Ambris, who replaced Evin Lewis, looked assured in the middle against India. Shai Hope has gotten 192 runs but has been far from his very best.

Nicholas Pooran has had his stutters as well. Jason Holder hasn’t had the greatest of times barring his half-century versus the Aussies. In the bowling department, Sheldon Cottrell has stood out for the Windies. The hulk-like Oshane Thomas has bowled with venom but has also leaked runs at alarming rates at times. Holder picked up a couple of wickets in the last game and he’ll be high on confidence.

The prediction is for the Windies to win the match. 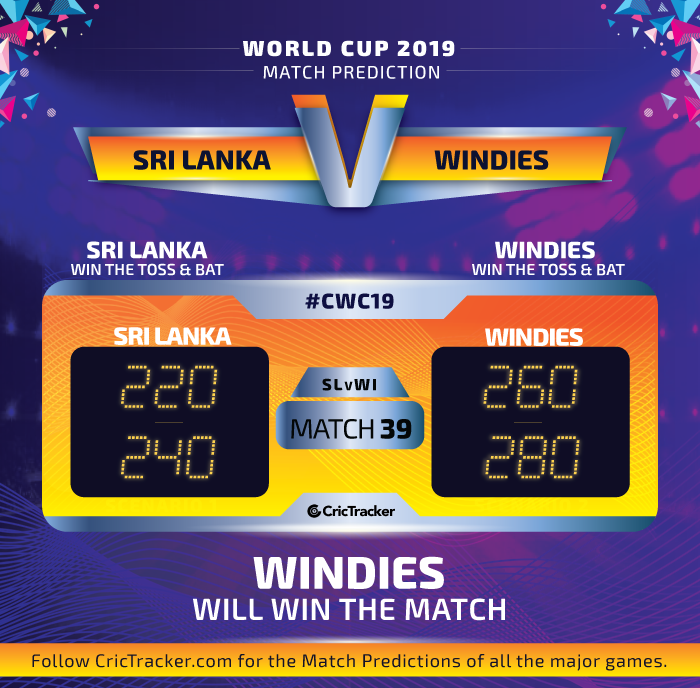