ICC World Cup 2019: South Africa’s fateful journey in the history of the tournament

The 12th edition of World Cup cricket will kick off at the Oval, England, on May 30 and the first match will be played between the hosts and South Africa. This is only the second time in the history of the showpiece tournament (after 1992) that there will be no groups in the preliminary stage and all 10 teams will play each other in a round-robin format before the top four place-holders advance to the semi-finals.

England are hosting the tournament for the fifth time since 1975 though South Africa will be playing only their second World Cup in that country after 1999 when they had their biggest heartbreak in the tournament. This is also the first World Cup in which all Test-playing nations will not be participating (Zimbabwe and Ireland missed out in the qualification tournament).

We are covering how the 10 participating teams have done in World Cup cricket and here we take up South Africa, currently ranked third in the ICC table, after England and India. South Africa have always remained a potential champion who could never realise their dream.

Of the 54 matches they have played in WC so far, South Africa have won 35, lost 17 and tied two though both those ties were costly. They played their first tournament only in 1992 after returning from the Apartheid ban and in the seven editions they played, the Proteas made the semi-finals four times but could never cross that hurdle once, thanks to inexplicable rules and regulations as well as their own collapsing nerves.

World Cup 1992; lost to England in the semi-final 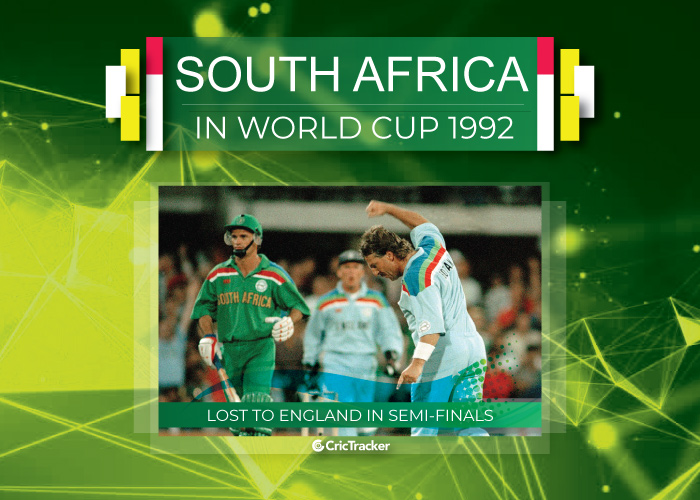 Led by Kepler Wessels, South Africa hammered a powerful Australia by 9 wickets in their very first game in WC and went on to win five of eight games in the round-robin league. They became the first African side to qualify for the semifinals in a cricket World Cup but there, utter bad luck awaited them, thanks to the bizarre rain rules in the tournament.

Against England, the Proteas required 22 runs off 13 balls at one stage but a downpour at that moment saw their target being reduced to 22 off 1 ball as two overs got deducted but no runs. It was certainly one of the game’s biggest moments of shame in those pre-Duckworth-Lewis-Stern rule days.