Usman Khawaja was hit by a Andre Russell bouncer in an unofficial warm-up game on May 22 and could be rested.

The arch-rivals England and Australia will renew their rivalry in the warm-up game of the upcoming ICC Cricket World Cup 2019. Exactly after a month, on June 25, the two teams will face off in the tournament proper at the iconic Lord’s. Though this game won’t be played with full intensity, both the teams would like to start having a lid on each other with a lot of cricket to follow in the summer.

For the hosts England, it will be about giving some game time to the fringe players who won’t be playing much in the tournament and are only backups. James Vince, Tom Curran could be two of these while Jofra Archer is also likely to get a taste of what an England vs Australia looks like. The Men in Yellow, on the other hand, would also like to try out a few things after doing decently well in the warm-ups against New Zealand XI and Windies.

The 3rd warm-up game of the ICC World Cup 2019 will be played between England and Australia at The Rose Bowl in Southampton.

The forecast is not promising for a game of cricket to take place on Saturday. The weather will keep changing from being sunny to cloudy and there are intermittent showers predicted during the match. There is 51% chance of rain according to Accuweather. We might be in for a shortened encounter between the arch-rivals.

The Rose Bowl pitch is full of runs. But there was also some lateral movement for the fast bowlers in the unofficial warm-up game between Australia and Windies at the same venue on May 22. It will be interesting to see if that will be the case again.

Usman Khawaja was hit by a bouncer from Andre Russell on May 22. Though he has been cleared of any injury, Khawaja might be rested completely.

Eoin Morgan got hit on the index finger during one of the training sessions and has been taken to the hospital for X-Ray as a precautionary measure and could be rested.

Aaron Finch vs England in ODIs: 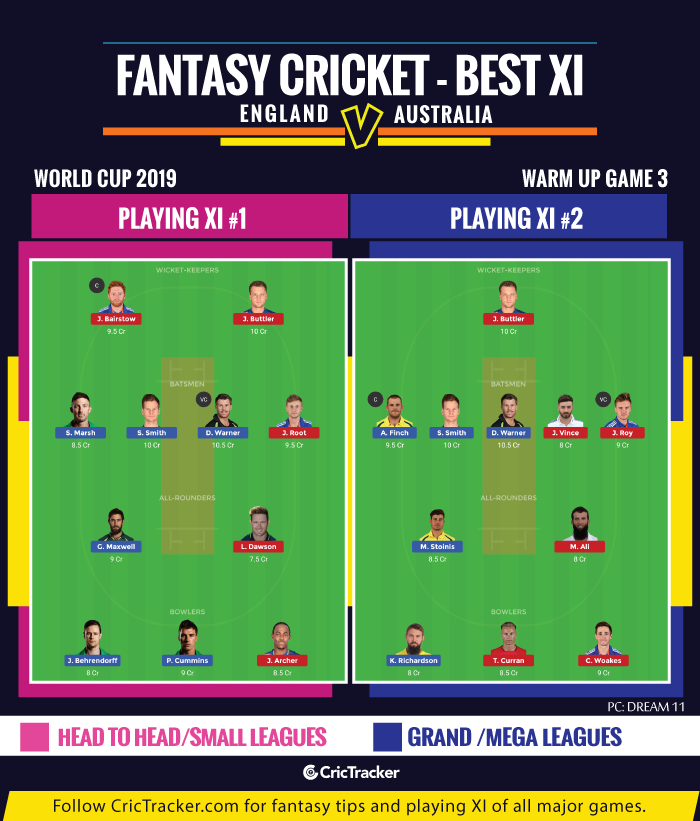 All 15 players are expected to play at some stage in these warm-up games. Take the players who are likely to be benched in the first game as they are mostly tested in such matches.

England are expected to win the game but Australia won’t make it easy for them.