In the last ODI in Southampton, 735 runs were hammered in all by both the teams.

Last year when Australia and England met in a full-fledged ODI series, the latter won 5-0. The Aussies were captained by Tim Paine and his team had no idea on how to stop the rampaging Englishmen. However, a lot has changed ever since, especially for the Men in Yellow after they appointed Aaron Finch as their skipper. Australian team has had a stupendous year after series wins versus India and Pakistan.

Recently, they played a few matches against New Zealand XI in Brisbane where the likes of David Warner and Steve Smith took part. Australia are now scheduled to play their first warm-up match tomorrow versus hosts England at the Rose Bowl in Southampton. The Brits are coming off a thumping 4-0 victory in the ODI series against Pakistan and would be keen to carry on with their impressive run.

The weather conditions aren’t something to cheer about as there are severe chances of rain throughout the match. The temperature will be around 20 degrees Celsius. The humidity is expected to be in the 50s. The sun will be behind the clouds for the most part of the day.

Southampton recently hosted an ODI between Pakistan and England, and the game saw 735 runs being scored in 100 overs. The visitors almost chased down 374 falling short by 12 runs. One can expect another batting paradise for tomorrow’s game. Out of 22 ODIs at the ground, 12 were won by the team, batting first.

England’s batting has been their strong point and that was on display in their erstwhile series. They will want to have a look at James Vince, who couldn’t convert the starts of 43 and 33 against Pakistan. Vince replaced Alex Hales from the provisional squad. Jofra Archer and Liam Dawson are two other players the management would want to test out. Meanwhile, Morgan won’t be a part of the match owing to an injury on his index finger.

David Warner and Steve Smith will be the ones in focus. While Steve is likely to bat in the middle-order, it will be interesting to find out Warner’s batting position. Smith is in good form with scores of 89* and 91 versus NZ XI and 76 against the Windies. The Aussies also won their unofficial warm-up game versus the Caribbeans by seven wickets. Mitchell Starc has been amongst the wickets as well after his injury layoff. 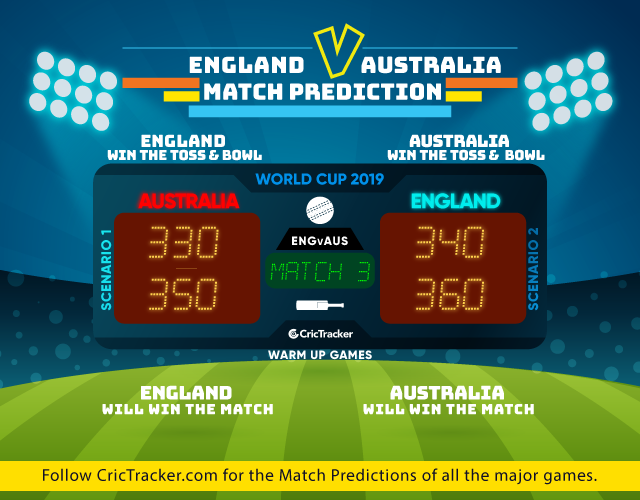