Choosing your captain and vice-captain gets quite tough with some great performers in both the teams.

South Africa will be back in action for the second and their last practice game against the Windies before they head into the World Cup 2019. In such a big game with all the names in the line-up, the decision of captain and vice-captain in your fantasy side becomes a tricky call. In their previous game against Sri Lanka, the Proteas completely dominated the opposition and registered an 87-run win. While this win will give them great confidence, facing a stronger team as the Windies will possibly expose their flaws.

The men from the Caribbean have been playing great cricket in recent times. They seem to have found the right balance to their side and have posed tough challenges to the oppositions. Some of their players are in scintillating form and they can take the game away from any opposition almost single-handedly.

Here is the guide to select the Captain and vice-captain for Dream11 Fantasy:

The South African skipper is in fine touch. He performed well for the Chennai Super Kings in IPL 2019 and carried the good form into the first practice game. There might not be any changes to his batting position and he is likely to bat at number three in the upcoming game as well. Du Plessis often gets to a big score once he gets his eye in and he can be your contender for the captain.

Windies wicketkeeper-batsman Shai Hope has been the backbone of the side for quite some time now. In the previous 10 or 12 ODI games, he was unbelievable and is consistently posting big totals against quality bowling attacks. With the kind of form that he has been in, Hope should surely be one of your options for the captaincy in your Dream11 fantasy team.

South African wicketkeeper Quinton de Kock didn’t bat in the first game against Sri Lanka. Thus, it is almost a certainty that he will open the innings against Windies. He is in good form and enjoys playing in the ODI format. De Kock has got the penchant to score big runs just like the other two batsmen on this list. If he gets to bat, he will surely want to make it count.

Andile Phehlukwayo was exceptional against the Lankans. First, he made a valuable contribution of 35 runs with the bat. Then, he was on fire with the ball picking up a four-wicket haul. However, his consistency is something that can’t be banked upon and thus you want to give him the vice-captain spot in case you pick him.

The Universe Boss Chris Gayle is someone who can single-handedly rip any opposition apart. He is usually unstoppable once he gets his eye in. However, he has got to counter the threat posed by Lungi Ngidi and Kagiso Rabada early on. Gayle could be destructive if he sees off the first few overs when the ball is likely to do some talking.

We have all witnessed what Andre Russell is capable of in the twelfth edition of the IPL. Playing for Windies, there is every possibility that he might bat higher up the order. Moreover, he is someone who can offer 10 overs with the ball and will be a valuable addition to your team. 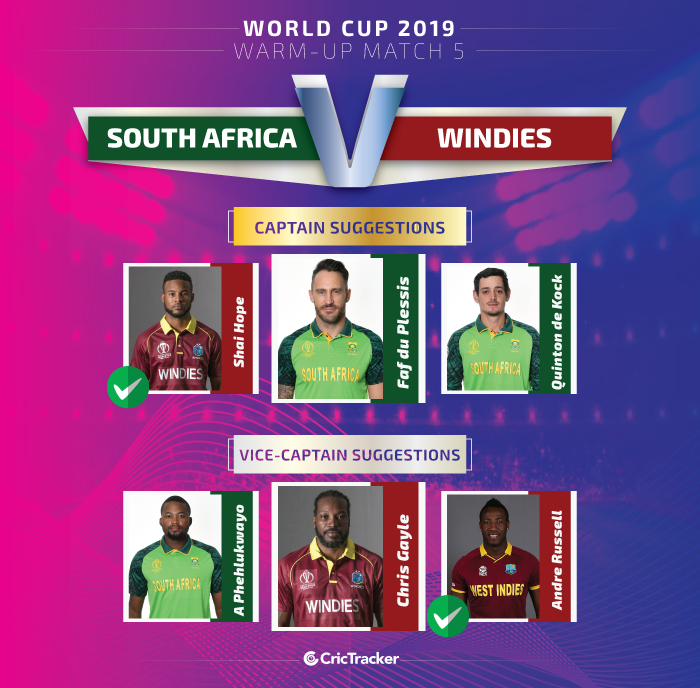