While there could be a temptation to pick captain and vice-captain from the Australian team, there are some good options available from Sri Lanka as well.

It seemed as if it was an eternity since Australia dominated the international cricket arena. Since the start of 2017, the side struggled across formats, particularly in the ODIs. But in the last few months, the fortunes have changed for the team. They defeated strong teams like India and Pakistan playing away from home. Moreover, defeating England in the previous warm-up game would’ve also come as a massive boost.

The players have found form just at the right time and the side was further bolstered with the inclusion of Steve Smith and David Warner. As they take on a depleted Sri Lanka in their next practice game, the Kangaroos will want to continue their dominance and register a big win this time. For the Asian team, their young batsmen need to step up. If they can do well against a strong Aussie bowling line-up, they will enter the World Cup as a confident unit.

Here is the guide to select the captain and vice-captain for Dream11 Fantasy:

Ever since he made his comeback from the elbow injury, David Warner has looked a completely different individual. He looks determined and is hungry for runs more than ever. Despite playing only 12 games, he scored 692 runs in IPL 2019 and finished as the Orange Cap winner. He is due for a big score in Australian colours. Warner scored 43 runs against England and his aim will surely be the triple figure mark when he faces Sri Lanka.

If are looking for someone to pick as your captain from the Sri Lankan team, it should be Angelo Mathews. He is the most experienced batsman in the side and is reliable in the middle order. He has got a good amount of experience playing in England and scored almost a run-a-ball 64 against South Africa. Mathews scored 227 runs in four innings in the Sri Lanka Super Four Provincial Limited Over Tournament recently. This included a century and a half-century.

As Steve Smith entered The Rose Bowl in Southampton, he was booed by the crowd. But, he finished on a great note scoring 116 runs from 102 balls which made the difference between both the teams. In fact, he registered scores of 89* and 91* in the last two games for Australia XI against New Zealand XI. Even in the practice game against Windies, Smith scored 76 runs and is in terrific touch.

Returning to the Sri Lankan ODI side after a while, Dimuth Karunaratne has started off on a great note with the bat. He accrued 77 runs against Scotland and followed this up with 87 in the practice game against South Africa. Karunaratne likes leading his side from the front and is likely to continue his good form in the next match.

After being rested against England, Glenn Maxwell is likely to return for the next encounter. He scored 52 and 70 runs in the two games for Australia XI and was unbeaten on 18 against Windies. Maxwell bowled in all these games and the Aussies are clearly looking at him as someone who can operate in the middle overs. On his day, the off-spinner might also pick up one or two wickets as he did against the Caribbean side.

In the wicketkeeper’s category, Kusal Mendis could be your best pick and you might also want to give him the vice-captain’s spot. He did well in the two games in England and looked quite positive. Mendis scored 66 and 37 runs in the last two matches. However, given his inconsistency, he should be your least preferred option. 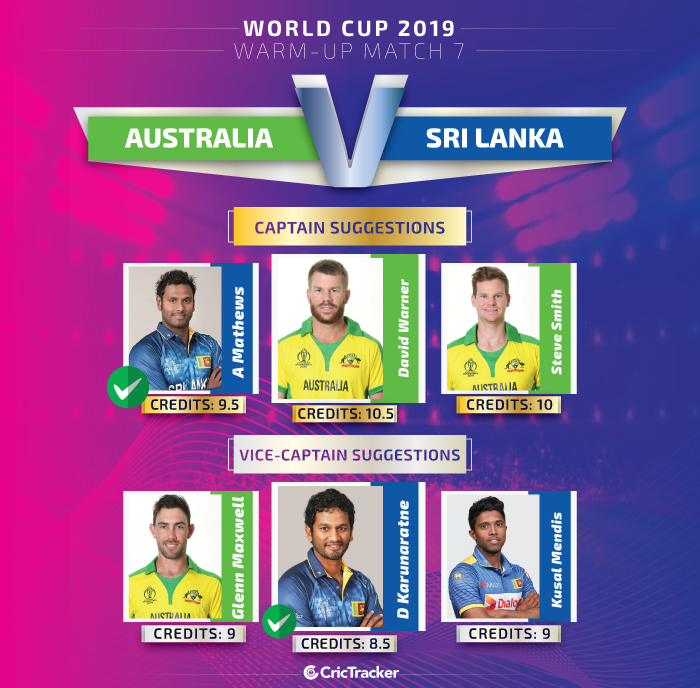