With the series tied at 2-2, a humdinger awaits us at the Kotla.

India had never lost an ODI after putting up 350+ on the board but in a rare first, the hosts squandered chances to close out the game and handed the 4th ODI to Australia. And for that reason, the loss at Mohali would have been rather embarrassing for Virat Kohli. So the series is tied at 2-2 and the Feroz Shah Kotla at Delhi will host the decider on the 13th of March.

Note that MSD and Md Shami are still out. So despite the crowds chanting for Dhoni, Rishabh Pant will continue keeping wickets. Also, Bhuvneshwar Kumar will feature in the XI for sure again.

Going into the series decider, India’s line-up is pretty much set – 6 batsmen, 1 all-rounder in Vijay Shankar and 4 bowlers. While KL Rahul will keep his spot at the expense of Ambati Rayudu, Kuldeep and Bumrah are your regulars with the ball.

At Mohali, Chahal got hit around pretty bad and therefore, considering the pitch at the Kotla, Kohli will have to make a call between Chahal and Ravindra Jadeja. It’s a good problem to have though; Chahal is the wicket-taker while Jadeja is one that locks up an end to aide a wicket-taker at the other end.

Finally, your batting picks from India ought to be Shikhar Dhawan, Rohit Sharma & Virat Kohli.

The run-chase at Mohali was Australia’s highest ever in ODI cricket. They stunned India and arrive at Delhi buzzing with confidence. Ashton Turner is the new sensation and he will be on everybody’s Fantain list for sure. Khawaja and Handscomb have been in great touch with the bat, so do pick them for sure. Remember Coulter-Nile has gone back home on paternity leave, so do not pick him.

Also, expect Stoinis to come back into the squad in place of Behrendorff. Your key picks from Australia will be Ashton Turner, Khawaja, Handscomb, Maxwell and Pat Cummins.

Shikhar Dhawan: after the southpaw’s stunning hundred at Mohali, it’s hard to keep him out of the scheme of things. Pick him for the renewed confidence and the fact that he’ll be playing on home turf

Glenn Maxwell: the Aussie all-rounder is the perfect “x” factor for a big game such as this. He’s the sort of player that is bound to rise to the occasion and deliver a sterling performance. So do consider him for the match-winning possibilities that come with the Maxwell-package

Virat Kohli: the loss in the T20I series would have hurt the man and the loss at Mohali would have added to his woes. Needless to say, expect the man to be charged up for one final flourish before the IPL commences

Usman Khawaja: the leftie has quite simply been Australia’s best batsman on this tour. Pick him for assured runs and Fantain points in your kitty

Pat Cummins: the all-rounder, although expensive, has picked up wickets rather consistently in this ODI series. And wickets translate to Fantain points. 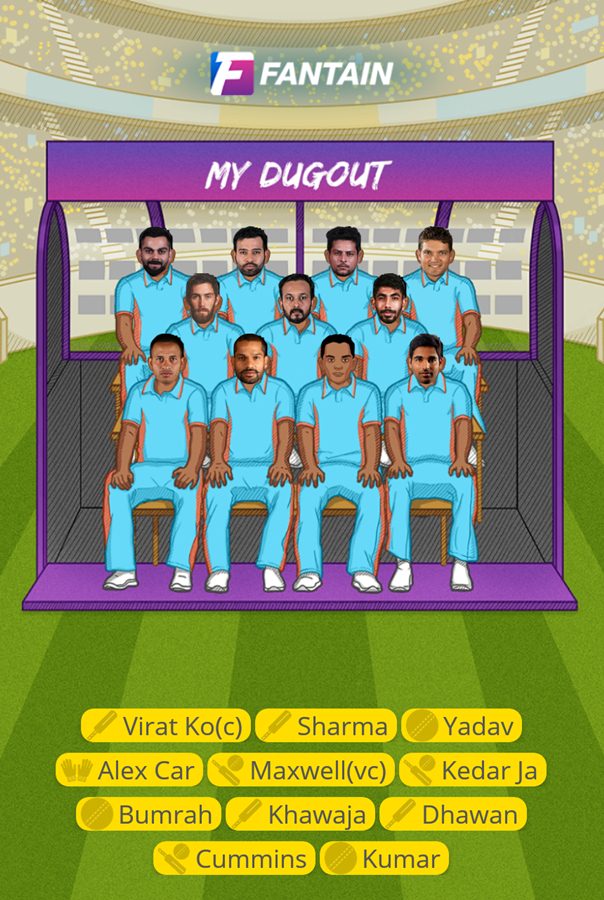