The pitch isn't expected to change much during the course of the game and another high-scoring affair seems to be on the cards.

India managed to come out of jail in the first ODI against England in Pune. However, the visitors learned from their mistakes and won the second game by six wickets. Chasing 337, the Three Lions achieved the target with as many as 39 balls to spare.

Jonny Bairstow and Ben Stokes went hell for leather to make sure that England go on to draw the equalizer with the resounding victory. With all to play for, the two teams are now set to play the decider of the series on Sunday, March 28 at the MCA Stadium.

The visitors would be confident that despite not having some of their key stars, including skipper Eoin Morgan, they put forth a strong show on Friday. Virat Kohli’s India, on the other hand, haven’t won an ODI series for over a year and would be looking to change their fortunes.

The pitch in Pune has turned out to be a bowler’s graveyard until now. The batsmen have made hay and playing shots on the up hasn’t been tough by any means. Keeping in mind that the track isn’t expected to change in nature, teams should again bat second. The conditions will be warm with the temperature around 33 degrees Celsius. There will be cloud cover but with no chance of a downpour.

There have been talks about Virat Kohli not being able to score a ton. But that doesn’t undermine the numbers he has had of late. He has scored 122 runs in the series with two half-centuries. Batting in the middle-order, he has looked at ease and the Indian team would be hoping for another decent knock from his blade.

Jonny Bairstow is the leading run-scorer in the series and has looked at utmost ease. In two games, he has 218 runs to his name at an average of 109. He missed out on a ton in the first game, but, well and truly, made amends in the next game. His strike-rate of 122.47 shows how fluent he has been. 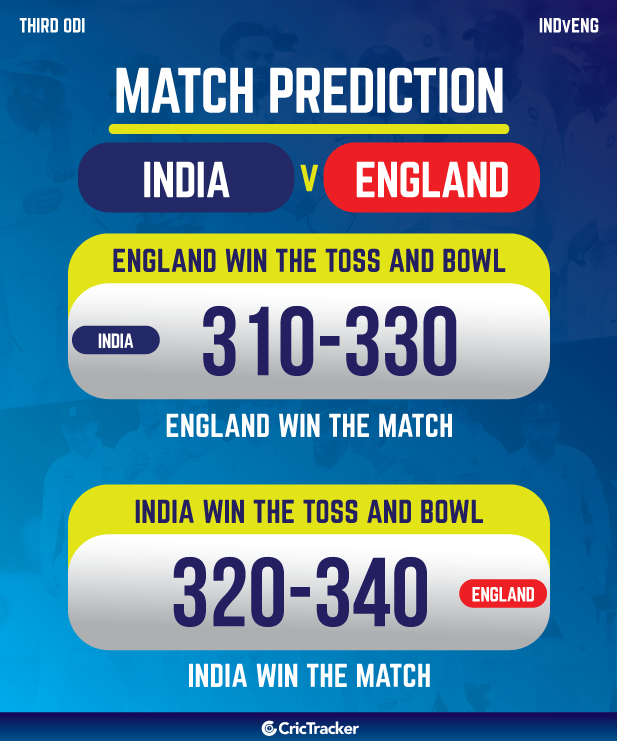