KL Rahul has scored only a solitary run in this series, but given his 1500+ T20I runs at an average of over 40, he can be a punt captaincy pick for your Grand League team. 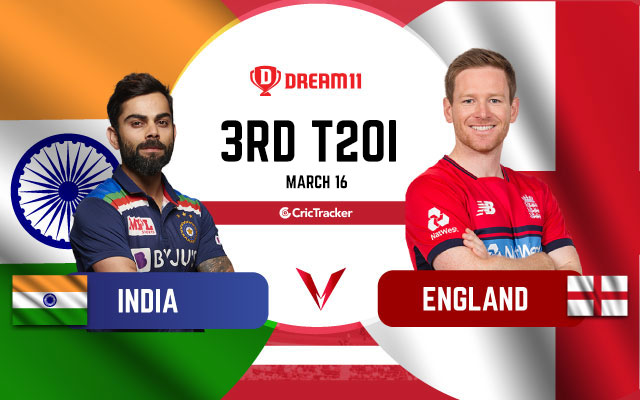 The 3rd of the 5-match T20I series between India and England will be played on 16th March at Narendra Modi Stadium in Ahmedabad.

The match is scheduled to start at 7:00 PM IST and local time. It will be streamed live on Star Sports Network, Jio Sports and also can be streamed on Disney+Hotstar.

After a rare slip in the first T20I, the men in blue are back to their lethal best, as they easily brushed aside the Englishmen in the second T20I of the series. They were in the driver’s seat right from the first over, where Bhuvneshwar Kumar trapped the dangerous Jos Buttler leg before wicket.

Commendable knocks from Jason Roy and Eoin Morgan helped England get to a respectable total, and when they dismissed KL Rahul for a duck, it seemed as if a 2-0 lead is on the cards. However, a fantastic debut knock by Ishan Kishan and an equally good inning by Virat Kohli sealed the deal for the Indians. Given how they played in the last game, it will be fair to say that they will start this game with the tag of ‘favourites’.

Once again, it will be very hot here in Ahmedabad. The temperature will be around 38 °C during the day, but it will drop down to 33 °C during the start of the game. There are no chances of precipitation.

From what we have seen in the last 2 games, the pitch has enough assistance for the batsmen. The team batting first should aim for a score of aroundf 170 here.

Amidst talks of whether Alex Hales should be in the reckoning for the upcoming T20 World Cup, Jason Roy is proving time and again why he is England’s first-choice opener. He is currently the highest run-scorer of this series, having scored 95 runs at a strike rate of over 140.

Another player who has shut his critics down recently is Virat Kohli. After getting out for a duck in the first T20I, he scored 73 runs in the second T20I.

Ishan Kishan had a dream debut in the last game. Opening the innings, he scored 56 runs at a fantastic strike rate of 175. He will now aim to nail his place down in the T20I side.

Dawid Malan’s strike rate might be a bit concerning, but keeping that aside, he has been a reliable player in the role of a sheet anchor. He has scored 48 runs at an average of over 45.

Jofra Archer has been the most successful bowler from the English camp. He has picked up 3 wickets and has an average of just over 15.

KL Rahul has scored only a solitary run in this series, but given his 1500+ T20I runs at an average of over 40, he can be a punt captaincy pick for your Grand League team.