Suryakumar Yadav was the player of the match for his tremendous batting display in his first outing with the bat. He is a budget pick and consider picking him at 8 credits in your Dream11 fantasy team. 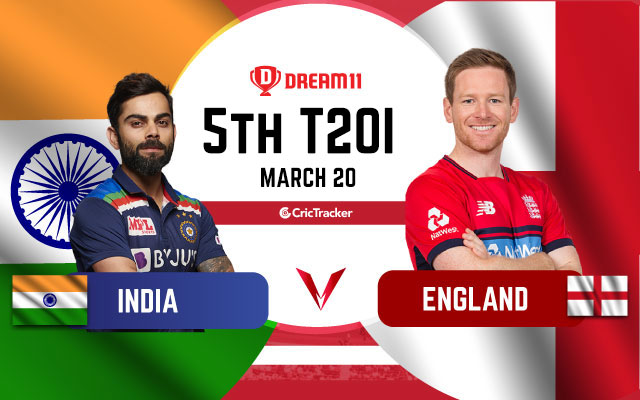 The 5th and final match of the T20I series between India and England will be played on 20th March at Narendra Modi Stadium in Ahmedabad.

The match is scheduled to start at 7:00 PM IST and local time. It will be streamed live on Star Sports Network, Jio Sports and also can be streamed on Disney+Hotstar.

India will take on England in the 5th and the final T20I match of the series on Saturday. India held their nerves to pull back the things in the 4th T20I and won the match by 8 runs in the final over of the game to level the series 2-2. Now all eyes will be on the decider T20I. Suryakumar Yadav’s promotion to No.3 in the previous game made a huge difference for India in the context of the match as he registered his maiden T20I fifty in just 28 balls and combined bowling performances from Bhuvneshwar Kumar, Hardik Pandya, and Shardul Thakur seal the game for India.

Not having the 6th bowling option and openers’ inconsistency is still bothering the skipper Virat Kohli. Will they be able to overcome all these barriers to win the series?

On the other hand, England would be devastated to lose the 4th T20I as they had control over most parts of the match in the 2nd innings. This time India had breached their lethal fast bowling fortress to put up 185 runs on the board which was the highest score in this series. When the game was in their hands, two back-to-back wickets of Ben Stokes and skipper Eoin Morgan in the 17th over took the game away from them.

No.1 T20 batter Dawid Malan not playing to his standards is the only concern for them. To give a tough fight to India on their home conditions isn’t easy for any visiting side and they have done a good job in this series. Both the teams are very competitive and whoever handles the pressure will take the series.

As usual, the weather in the daytime will be pretty hot with the maximum temperature touching the 38 degrees Celsius mark, whereas evenings will be much cooler with the temperature ranging 28 and 34 degrees Celsius. There is no chance of precipitation in this match.

It’s a true competitive wicket. We have seen batters scoring runs and we witnessed pacers picking up wickets at regular intervals. The dew factor plays a major role and it’s challenging for the bowlers to grip the ball especially in the second half of the game. It’s still a chasing venue and bowling first is a better option on this track.

Suryakumar Yadav waited patiently for his turn to play at the highest level and it was worth a wait for him as he announced his arrival with a grand first ball six over fine-leg. He notched up his maiden T20I half-century in his first innings with the bat scoring 57 runs from 31 balls.

Shreyas Iyer seems to be enjoying his role in the middle order. His blistering knock of 37 runs from just 18 balls helped India to put up a competitive score on the board in the 4th T20I. Overall in this series, he has scored 121 runs in 4 matches at an average of 40.33.

Virat Kohli kind of sacrificed his actual No.3 spot and he wasn’t able to deliver for his team coming at No.4. But he is still the leading run-scorer in this tournament, scoring 151 runs in 4 matches at an average of 75.5.

Hardik Pandya was the most economical bowler for India in the 4th T20I. He picked up 2 crucial wickets by conceding just 16 runs in his full quota of 4 overs. We know he is a dangerous batter who can make the difference in the slog overs.

Jason Roy’s ability to go after the bowlers from the start makes him one of the successful batters in this T20 format. In the 4th T20I, he played well for his 40 runs from 27 balls. Overall in this series, he has scored 144 runs in 4 matches at an average of 36.

Jos Buttler was undone by a slower one off Bhuvneshwar Kumar’s bowling in the 4th T20I when he was on 9. But he is a match-winner, has won many matches single-handedly for his side. In this series, he has scored 120 runs in 4 matches at an average of 40 with the highest score of 83*.

Ben Stokes was going well on 46 runs from 23 balls in the last game and showed the signs of winning the game for England but lack of timing cost him his wicket. In the 2 matches he has batted in this series, he has scored 70 runs at an average of 35.

Jofra Archer bowled incredibly well in the 4th T20I, picking up 4 wickets at an economy of 8.2 and he is the leading wicket-taker in this series with 7 wickets in 4 matches.

Suryakumar Yadav was the player of the match for his tremendous batting display in his first outing with the bat. He is a budget pick and consider picking him at 8 credits in your Dream11 fantasy team.