It is advisable to pick four bowlers in at least one of your Dream11 fantasy teams. 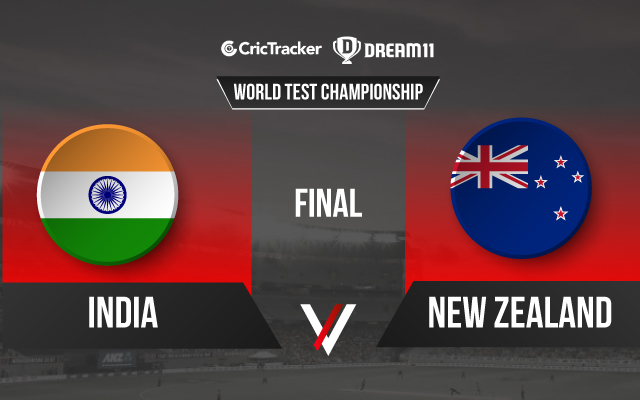 India will take on New Zealand in the historic occasion of the World Test Championship Final, which is starting on Thursday. India topped the points table with 520 points, whereas New Zealand finished second with 420 points. India are leading 3-2 in the head-to-head contest in the last 5 matches against New Zealand. It will be interesting to see whether India will go with a specialist batter or an all-rounder.

Meanwhile, New Zealand have an upper hand since they had won the Test series against England 1-0. Skipper Williamson is back after recovering from an injury. The No.1 Test side have got a well-balanced side and has the ability to beat any side.

The track here at Rose Bowl will assist the batters for the first two days. Having said that, it is conducive for the seam bowlers as well. There are more chances of rain interrupting the match for all 5 days.

Playing XIs for IND vs NZ:

Virat Kohli had a terrific run on English soil when the last time India toured England in 2018. The Indian skipper has accumulated 7490 runs in his 91 Test matches at an average of 52.37

Devon Conway made a dream debut in the recent Test series against England and scored a brilliant double century at the home of cricket, Lord’s. He looks composed and can attack the bowlers as well.

Ravichandran Ashwin has shown that he can pick wickets on any kind of surface, and more importantly, he can very be handy with the bat at number 8. He has 409 wickets to his name in the longest format and scored 2656 runs at an average of 27.95.

Jasprit Bumrah will lead the Indian fast bowling unit. He has played more Test matches in overseas conditions which will help him in this match. He has scalped 83 wickets in his just 19 Test matches.

Neil Wagner is very likely to trouble the Indian batters with his swing and short deliveries. The 35-year-old New Zealand pacer has picked up 226 wickets in 53 Test matches at an average of 26.38.

Rishabh Pant will be an X-factor for India. He is someone who likes to go against the bowlers even if conditions are difficult. He is the only Indian Wicketkeeper to score two centuries in overseas conditions.

Indian vice-captain Ajinkya Rahane is an important batter in the middle-order. He averages 41.28 in his Test career and it’s worth a risk in picking him as your fantasy team skipper.

Tim Southee has a good record in English conditions. He can swing the ball both ways, which is his greatest strength. You can take a risk and pick him as your fantasy team skipper.

You can afford to drop BJ Watling from your plans, since Rishabh Pant should be the first-choice wicket-keeper for your fantasy teams.