Find out the probable playing XIs of India A and England Lions for the first unofficial Test match.

After completing a dominant series win over the England Lions in the 5-match Unofficial ODI series, the India A team will now look forward to the 2-match unofficial Test series. The spotlight will be on KL Rahul who has been included to play the first Test. India A won the ODI series by a 4-1 margin with the lone defeat coming in the last match that too by a 1-wicket margin. The pitches got tougher as the series progressed and made life tough for the visiting side while chasing 122.

Prior to the Unofficial Test series, the Lions took on the Board President’s XI in the 2-day practice match. The game was played in the format of a team playing 60 overs in one inning and 30 overs in the other. The hosts led by Ishan Kishan defeated the England Lions comfortably as they score more across both the innings. The visiting team decided to treat the game as a warm-up and didn’t accelerate in the second innings.

The first game of the 2-match Unofficial Test series between India A and England Lions will be hosted by Krishnagiri Stadium in Wayanad.

This series won’t be broadcasted or streamed due to conflicting with the ongoing Ranji Trophy.

The recent matches at the Wayanad suggest that the track will be a dream surface for the pacers. During Kerala’s quarter-final and semi-finals against Gujarat and Vidarbha respectively, the Pacers made merry on the helpful pitches which produced low-scoring games.

Markande might not make it to the XI straight away. Depending on the track in Wayanad, India A could pick the pacers. Thakur will come handy on a surface with grass while Varun on a pitch which is expected to have more pace.

One of Mullaney and Jacks is expected to make the playing XI.

Sam Hain was shown retired hurt in the 2-day practice game. However, this could be to allow remaining batsmen to have a go in the game.

Siddhesh Lad had a decent Ranji Trophy in terms of individual performances. The stand-in Mumbai captain didn’t have great scores in the 2nd innings but was brilliant in the first essay. In the seven first innings in the Ranji Trophy 2018/19, Lad scored two centuries, two 90s, fifty and two scores under 25. 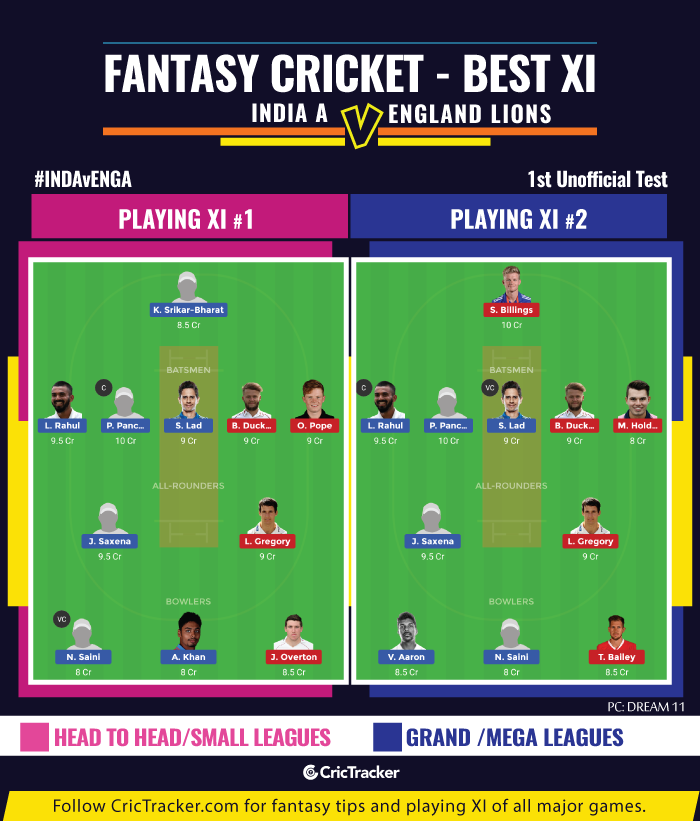 Only one among Sam Billings, Alex Davies and KS Bharat can be picked from the wicketkeepers’ category. Davies performed well with the bat in the Unofficial Series while Billings is expected to lead the team from the front. Bharat is assured of the points through his glove work given the quality bowling attack of India A.

India A is expected to start the series against the England Lions on a good note.