While Team India gears up for the World Cup, the India A side will take on the Sri Lanka A side in the 2-match unofficial Test series starting on Saturday in Belagavi. The Priyank Panchal-led team contains some consistent performers from the Ranji Trophy and other first-class competitions. This series will be a crucial one for the likes of Panchal, Rahul Chahar and KS Bharat who are not so far from being in Test selection fray.

On the other hand, the Sri Lanka A team is more or less a squad of players who were discarded from the Sri Lankan World Cup squad. Niroshan Dickwella and Akila Dananjaya featured in most of the ODI matches played by the Sri Lankan team in the last two years. However, both were axed to fill players with dual roles or to say the players with ‘3-D’ skills. Ashan Priyanjan will be captaining the visiting team in this series.

The first of the 2-match Unofficial Test series between India A and Sri Lanka A will be hosted by Union Gymkhana Ground in Belagavi.

The Union Gymkhana Ground in Belagavi will be hosting it’s only the 3rd first-class game. The previous match here was in 2000 and the one before that was way back in 1970. It is tough to predict how the pitch would do on a venue that hosted two games in the last 49 years. Going by the scorecards of those two matches, one could expect a result oriented track for this 4-day game.

Siddhesh Lad has had an interesting record in first-class cricket over the 12 months. In the 19 innings since 2018, Lad scored 825 runs at an average of 43.42 including two centuries, two scores of the 90s and four fifties. However, six of those eight fifty-plus scores have been recorded in his team’s first innings. In the second essay, Lad has only two fifties to his name in nine instances in the last year.

Shivam Dube is known for his performances with both bat and ball in the longer format and is expected to hand a lot of points to the ones who make his captain. Priyank Panchal has been making runs in all formats for a while now. He had a good series against the England Lions earlier this year and is expected to continue it. 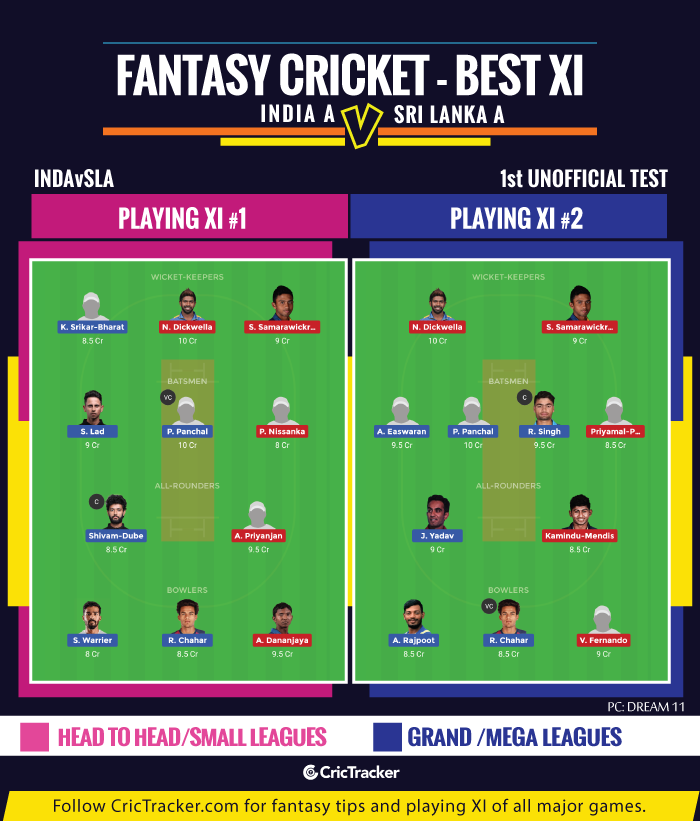 Unofficial Test series serves the purpose of handing chances to all players in the squad. India A, in general, makes a lot of changes every game to ensure everyone gets enough game time. With this game being the first of the two-match series, the likes of Anmolpreet Singh, A Sarwate and Ishan Porel might get side-lined.

India A is expected to start the unofficial Test series with a comfortable win over the tourists.