The Bangladesh Legends have a number of players, who played in the 1999 and 2003 World Cup.

India Legends and Bangladesh Legends are set to lock horns in the fifth game of the Road Safety World Series on Friday, March 5. India Legends, led by Sachin Tendulkar, have already won two games against the West Indies and Sri Lanka respectively. It goes without saying that Tendulkar and Co would start as favourites in the third game at the Shaheed Veer Narayan International Stadium.

The Bangladesh Legends have a number of players, who played in the 2003 World Cup. Left-arm spinner Abdul Razzak, who recently retired from all forms of cricket, is also a part of the game. Khaled Mahmud, who became the Player of the Match, in Bangladesh’s epic win over Pakistan in the 1999 World Cup, is also a part of the match. The legendary Mohammad Rafique will also ply his trade.

Six IPL matches have taken place at Raipur and the team, batting second have gotten a fair amount of advantage. The venue isn’t a high-scoring one by any means and a score in the range of 150 and 160 is defendable on the surface. The temperature will be around the 29 degrees Celsius mark.

Playing Combinations for INL vs BDL

Virender Sehwag started the tournament with a masterful 74 runs off 57 balls with the help of 11 fours. He stayed not out and helped India chase down 151. Though in the second game, he could manage only three runs, getting run out, the fact that he is dangerous can’t be undermined by any means.

Mohammad Rafique was one of the enigmatic players of his nation during his playing days. With 226 wickets from 159 games, the left-arm spinner was at the peak of his powers. He, once, was the torchbearer of Bangladesh cricket and a lot would be expected of him when he takes the cricket field.

The prediction is for India Legends to win the match. 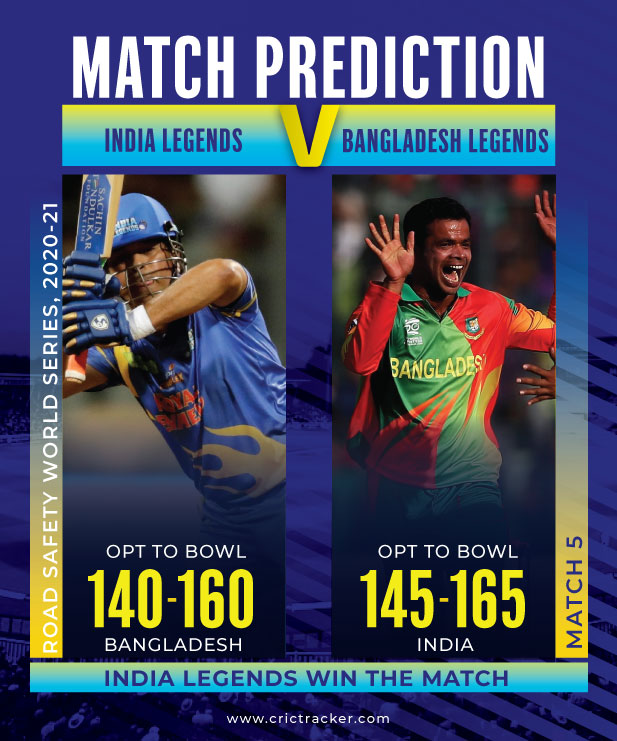