India Legends resumed action in a spectacular fashion this year, as they thrashed Bangladesh Legends by 10 wickets.

The 9th match of the Road Safety World Series T20 will witness the India Legends taking on the England Legends at the Shaheed Veer Narayan Singh International Stadium in Raipur. Having won two encounters in 2020, the table-toppers India Legends resumed action in a spectacular fashion this year, as they thrashed Bangladesh Legends by 10 wickets inside 11 overs in a rather one-sided contest. After restricting Bangladesh to an unimposing total of 109, Virender Sehwag’s 35-ball 80, featuring 10 fours and 5 sixes, blew away the new entrants.

England Legends, on the other hand, managed to start their proceedings on a winning note too, beating Bangladesh by 7 wickets in their first league fixture. After being put in, Bangladesh failed to accumulate a score of substance yet again, dented by Chris Tremlett (2/10) and Monty Panesar’s (1/15) frugal spells. During the chase, Kevin Pietersen’s aggressive 17-ball 42 alongside Phil Mustard (27 from 16) and Darren Maddy (32 from 32) guided England to a comfortable victory with 36 balls to spare.

The track at Raipur has been evidently assistive for the spinners, with moderate bounce, thus far. That said, the scoring has not been hard by any means. With a slight bit of dew setting in as the match progresses, the chasing teams have found the going easier.

Playing combinations for INDL vs ENGL

Virender Sehwag was at his devastating best against Bangladesh Legends in the previous fixture. Doing what he does the best, Sehwag took the attack without any fuss to the opposition, slamming 80 from merely 35, as he sailed India towards the winning line.

Kevin Pietersen oozed class in his aggressive 17-ball 42, which included some scintillating stroke-play and provided the required momentum to England’s chase. Expect him to fire once again with the same intent. 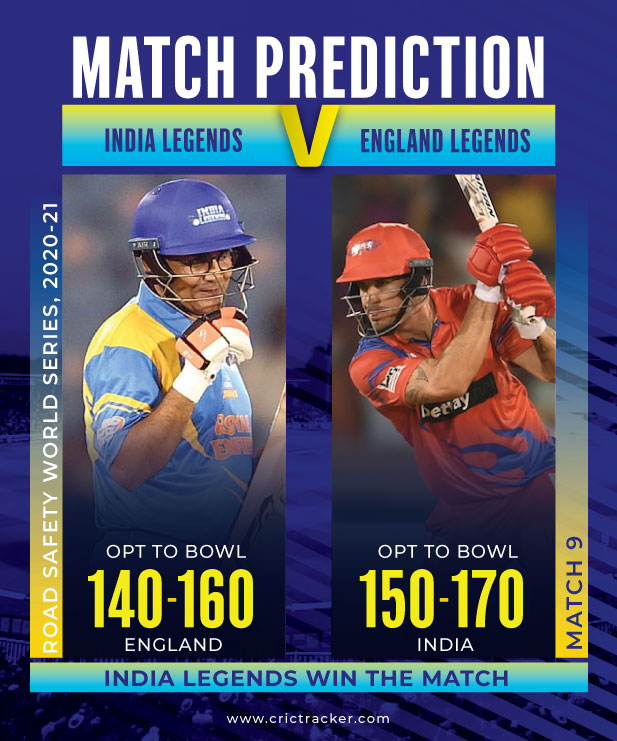