The South Africa Under-19s tour of India will kick start with a 2-match Youth Test series against the India Under-19s in Kerala starting on 20th February. The Proteas’ Youth team will be in India for nearly 25 days for the Test series followed by a Quadrangular ODI series. The 4-team tournament will be played between March 5th and 11th involving South Africa U19s, Afghanistan U19s and two India U19 sides – India A and India B.

The first of the two-match Test series will be hosted by the St Xavier’s College Ground in Thumba. The hosts led by Suraj Ahuja has players, who performed in theCooch Behar Trophy, in their squad. Seven of the 16 players in the India U19 side were in top ten run-getters and wicket-takers list. The talking point of India’s squad is 10-wicket haul hero Rex Singh who became the first player from Manipur to find a place in an Indian squad.

The 1st match of the two-match Youth Test series between India Under-19s and South Africa Under-19s will be hosted by the St Xavier’s College Ground in Thiruvananthapuram.

This series won’t be broadcasted due to the Syed Mushtaq Ali Trophy starting on 21st and the Indian Women’s series against England beginning on 22nd.

The St Xavier’s College Ground in Thumba is perfect for the batsmen on 2nd and 3rd days. The first and final days of the game aid support to the pacers and spinners respectively.

The Kerala captain Vathsal Sharma ended the Cooch Behar Trophy 2018/19 as the leading run-getter. He scored 1235 runs from 12 innings at an average of 123.5 with five century and six fifties. Interestingly, he has been listed as a bowler for the first Youth Test in Dream11. He costs only 8 credits and picking him will be a no-brainer. 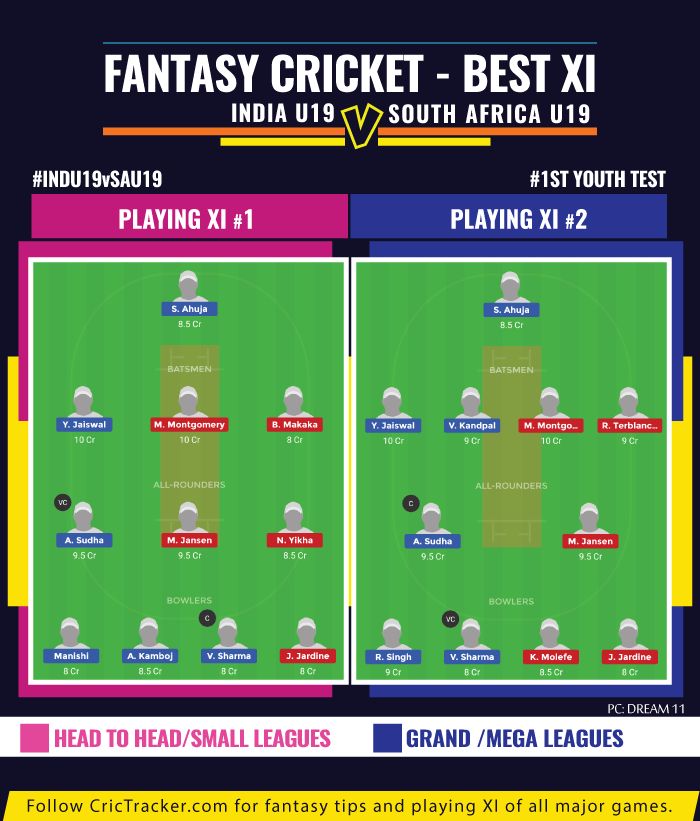 The probable XIs and suggests XIs are made based on the players’ merit and performances in age-level cricket. India U19s are expected to give chances to all the players in the squad in the series.

India Under-19s are expected to take a lead in the 2-match series against the South Africa Under-19s.