Saif Hassan and Yashasvi Jaiswal could be picked up as captain and vice-captain.

The 5-match One-Day series between India Under-23s and Bangladesh Under-23s finally began on Friday. The match was supposed to be played on Thursday but due to the rains it got started on reserve day. This series was moved from Raipur to Lucknow owing the rainfall over the last couple of day. India U23s won the first game by 34 runs which turned out to be a low-scoring match as it aggregated only 350 runs.

The hosts lost a wicket in the very first over of the match after losing the toss. BR Sharath’s 42 and Aryan Juyal’s 69-run knock played key role in their recovery. No other batsman scored even 25 runs as they finished with 192/8 in their 50 overs. The visiting team lost five wickets for just 46 runs on the board. Top-scorer Zakir Hasan (48) retiring hurt turned out to be the deciding moment in this match.

Thunderstorm with rain is expected during the morning. However, clear weather is expected from 11 AM and hence we might have a game with delay. If the weather forecast comes true, we might see a game of around 25 overs apiece.

As expected, the spinners did dominate the wicket column at the Ekana Stadium. However, the early movement with the new ball wasn’t witnessed previously here. The rains left moisture over the pitch as a decent number of wickets fell in the first 15-20 overs.

Zakir Hassan was retired hurt during the first One-Day match.

BR Sharath could be among the top performers as the keeper-batsman gets chance to bat in top three. He will add points with his keeping and thus he bagged a total of 97 points in the first One-Day. Sheikh Mehedi Hasan could continue troubling Indian batsmen and his batting will be a bonus.

The consistent batsmen Saif Hassan and Yashasvi Jaiswal were made to bowl a couple of overs due to the lack of spin bowling options. Both ended up taking a couple of wickets each. They could be picked up as captain and vice-captain. 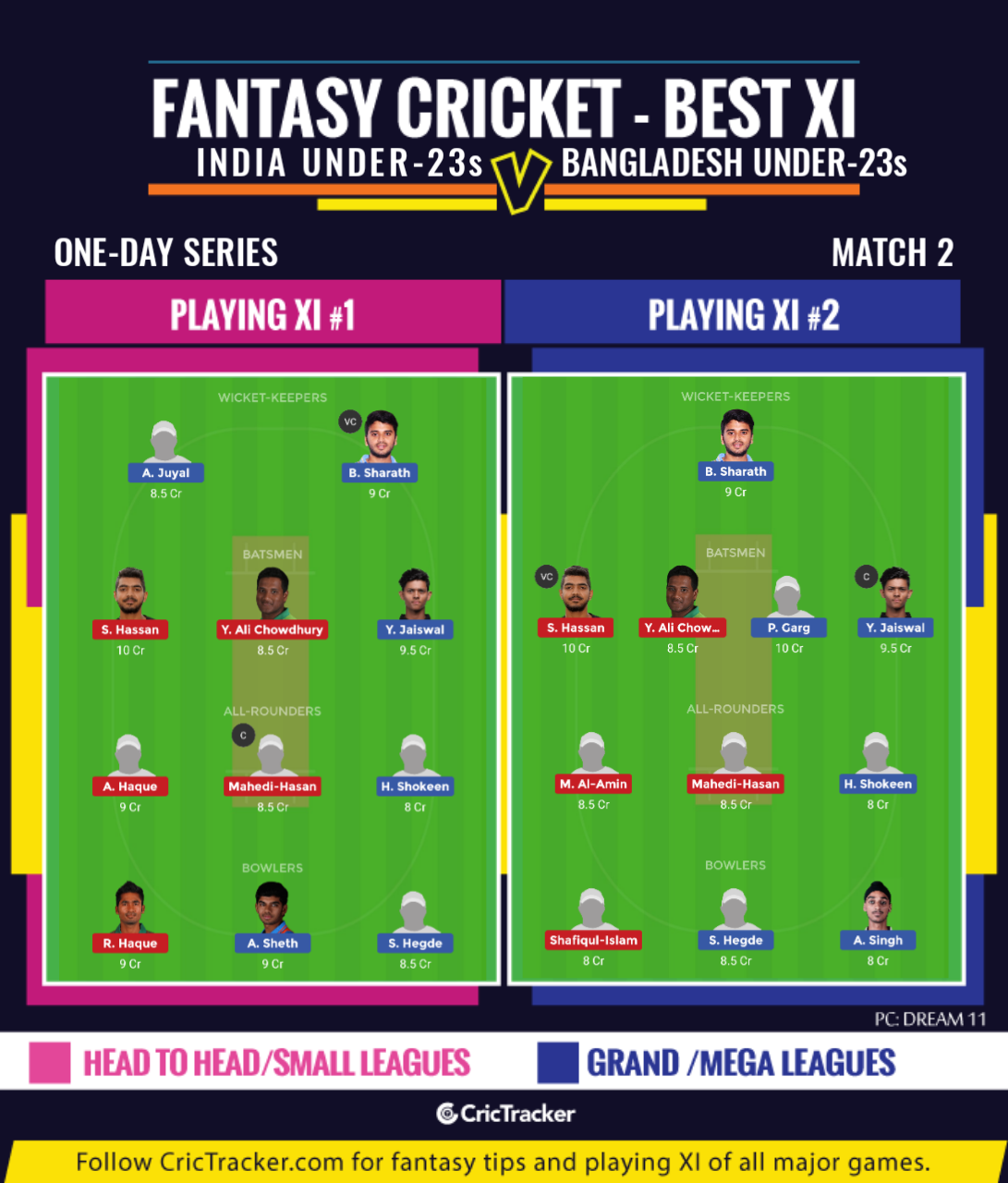 There was a bit of confusion around for the fantasy for the 1st One-Day. The name in the squads and Dream11 was Sheikh Mehedi Hasan while the same player was listed as Mehidy Hasan Miraz on BCCI site. The uncapped Mehedi also bowls off-spin and can bat just like Mehidy, the Bangladesh International player. The actual player was Mehedi itself and moreover, Mehidy is getting ready for facing Sri Lanka A later this month.