Yashasvi Jaiswal has scored 101 runs and took 4 wickets in this series.

The 5th and final match of the 5-match One-Day series between India Under-23s and Bangladesh Under-23s at the Bharat Ratna Shri Atal Bihari Vajpayee Ekana Cricket Stadium in Lucknow.

India Under-23s sealed the 5-match One-Day series against Bangladesh Under-23s with their 2nd consecutive win. After the Bangladesh team elected to bat first, the Indian pacers sent back the top four with only 55 runs on the board. Md Ariful Haque (44), MD Al Amin (40), Mahidul Islam Ankon (51*) and Robiul Haque (29*) took the total past 200 with two fifty-plus partnerships.

The home side got off to a similar start but they were well ahead of the required rate. Skipper Priyam Garg scored the first century of the series. He finished unbeaten on 111 off 118 deliveries with 13 boundaries. India U23s completed the chase with 46 balls to spare for the loss of six wickets. Both the teams might make a couple of changes for the last match by shuffling the batting order.

Thunderstorms with rain are expected throughout Friday at the Ekana Stadium. The match could go into reserve day as the chances of rain are quite high.

High scoring rates were recorded during the two shortened matches but both the games that finished without any interruption turned out to be low scoring ones. We could see the pacers picking up wickets early on and spin coming into the scene later on.

The trio of Atit Seth (6), Arshdeep Singh (5) and Hrithik Shokeen (6) took 17 wickets between them. No other bowler have taken more than four wickets in this series. Mahidul Islam batted twice in the series and got fifties in both of those.

Yashasvi Jaiswal has scored 101 runs and took 4 wickets in this series. 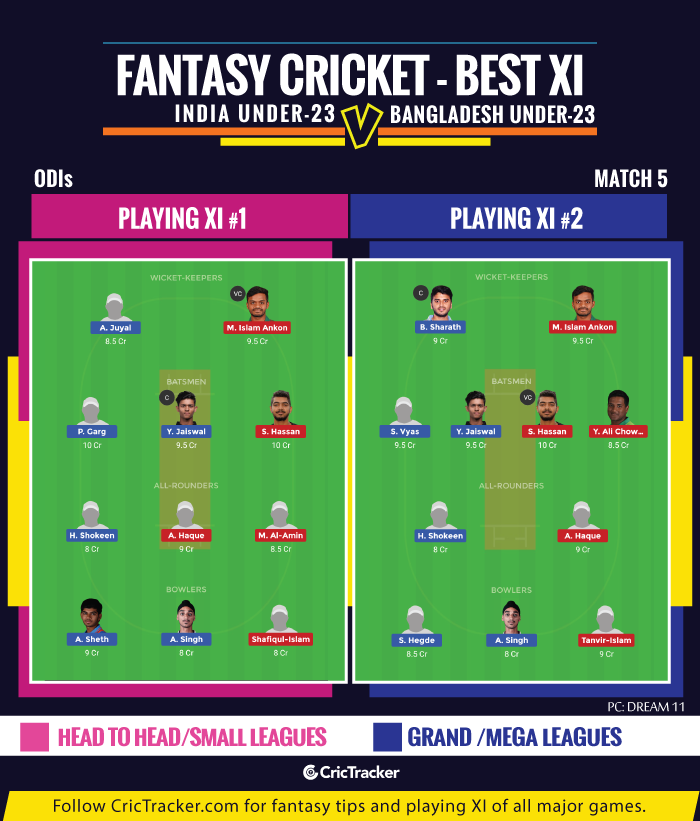 It is quite unlikely to have toss update for this game by scheduled start. The venue is expected to be under covers for the most part of the Friday and could push the game into reserve day. Hence, the Probable Playing XIs mentioned in the article could come handy.

India Under-23s are expected to finish the series with another win.