This will be the last ODI series for Team India before the World Cup in England.

After an abysmal loss in the T20I series, India will be looking to turn thing around in this 5 match ODI series starting from 2nd March in Hyderabad. The last T20I bilateral series that they lost was way back in 2015, so this series loss might have dented their confidence a bit. On the other hand, Australia will be pretty happy with their performances, especially in Bangalore. While chasing a total in excess of 190, they were off to pretty bad start losing Finch and Stoinis early. But after that, we have seen special innings from Maxwell scoring an unbeaten knock of 113 runs of just 55 balls and took his team home.

From India’s point of view, Kl Rahul form was the biggest positive from this T20I series, his contribution in both the matches might have given him the place in the playing eleven. While it was a treat to watch Virat and Dhoni batting along, they put over 100 runs between them which give an extra cushion for the bowlers considering that they went with only 5 bowlers. But this wasn’t enough as Maxwell Blitz gave Australia the series.

India has announced squad for the first 2 ODI matches, Ravindra Jadeja comes back in place of injured Hardik Pandya, Bhuvenshwar Kumar has been rested for the first two matches and KL Rahul in back in the ODI setup.

Meanwhile, Kane Richardson has been ruled out of the series due to injury while Andrew Tye has been named as a replacement Even after the loss in the T20I series, India will be going as favourites in this series because they are much more familiar with these conditions.

The wicket here is considered as a flat track, which tends to slow down as the game progresses. This means that the spinners would enjoy bowling here than the pacers. 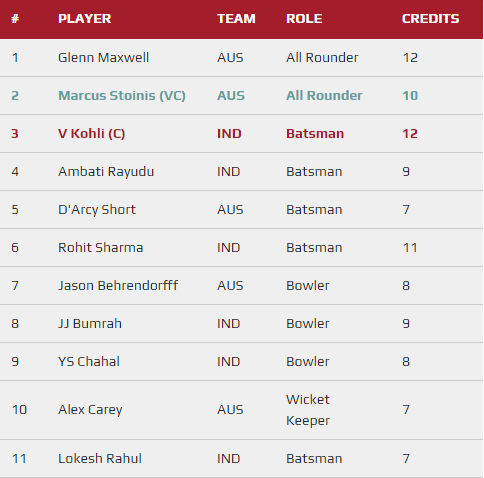 Rotobash Prediction: The prediction is for Team India to win the match quite comfortable.