India have been dented with Hardik Pandya's injury.

Just after a month’s gap, the rivalry between India and Australia will revive again as a part of the World Cup 2019 preparations. It is the turn of the Kangaroos to tour India this time around and they will begin the tussle against the Men in Blue with the T20Is first. The last time these two sides met down under for the shortest format, the series was levelled 1-1.

Thus, both the teams will look to assert their dominance in this series to try and prove themselves a better T20 side. The first game in the two-match series will be played at ADA VDCA stadium in Visakhapatnam. The T20Is will be followed by a 5-match ODI series and these seven games will be a great opportunity for the two teams to narrow down on the combinations.

The boundaries in Vizag are quite small and it wouldn’t be a massive task to clear them. With some power-hitters in both the teams, a lot of runs could be expected. The pitch might have assistance on offer for the spinners. Moreover, the weather prediction for the match is great with clear skies and a gentle breeze blowing around.

India will have Shikhar Dhawan and Rohit Sharma opening the innings. KL Rahul, who has got a chance of redemption, might be slotted into the eleven straightaway at number three. Thus, Virat Kohli will be pushed down to four followed by MS Dhoni at five.

Rishabh Pant might get his opportunity in the first T20I while Dinesh Karthik could get a chance in the second. Vijay Shankar and Krunal Pandya will be the two all-rounders. Umesh Yadav, Yuzvendra Chahal and Jasprit Bumrah will share the bowling duties.

Australia has got a problem of plenty regarding the opening slots. But, it could be Marcus Stoinis who might open the innings with Aaron Finch after the BBL 2018-19 exploits. Usman Khawaja and Peter Handscomb will follow next in the line-up.

One player between Ashton Turner and Shaun Marsh could be picked. Glenn Maxwell will bat at six followed by Alex Carey. However, the chance of Carey opening the innings can’t be ruled out. Nathan Coulter-Nile, Pat Cummins, Adam Zampa and Kane Richardson are likely to be the bowlers.

The prediction is for India to draw first blood and take an early lead in the series. 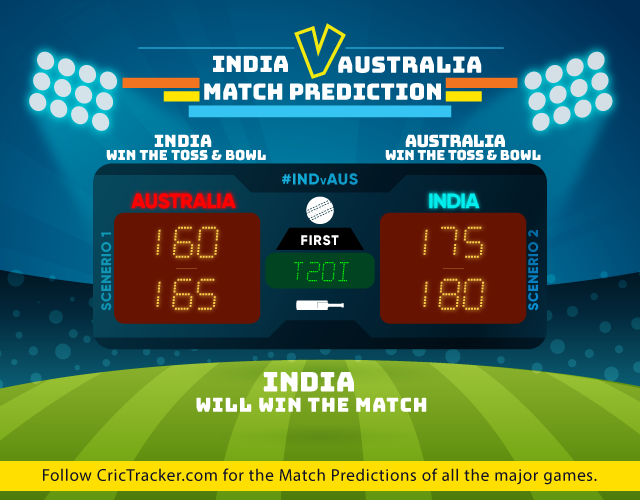