Shaun Marsh will most probably play this match.

India and Australia will once again lock horns in the second of the five-match ODI series in Nagpur. The hosts are leading by 1-0 and they will be looking to double it by winning this game. Kedar Jadhav and MS Dhoni helped India win the series opener with an unbeaten 141-run partnership and the middle-order winning the game must have delighted the team management.

Australia, on the other hand, look set to bolster their batting with Shaun Marsh returning. He will most probably replace Ashton Turner. Dhoni didn’t look comfortable in the last match and might be rested as a precautionary measure. Though no update has come on the same. The visitors, however, will be hoping for a better show with the bat in this encounter with World Cup in sight.

The 2nd game of the 5-match ODI series between India and Australia will be hosted by the VCA Stadium in Jamtha, Nagpur.

Pant could play as wicket-keeper if Dhoni is not fit.

Shaun Marsh was involved in a full training session after landing in India. He is expected to play the 2nd ODI.

Rohit Sharma in ODIs against Australia: 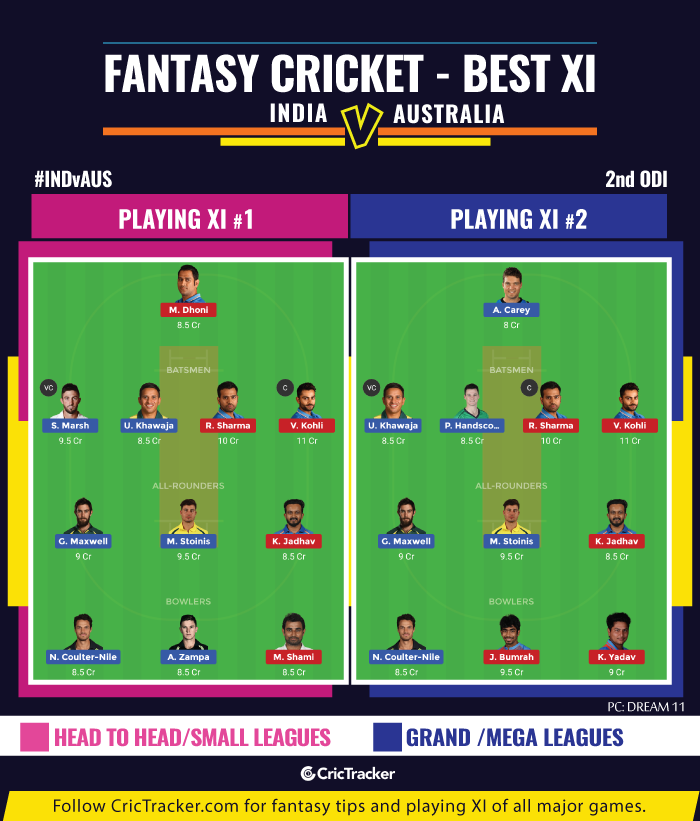 Jasprit Bumrah and Kuldeep Yadav’s costs are too high to pick if anyone takes all of Kohli, Rohit, Marsh, Stoinis and Maxwell.

India are expected to make it 2-0 in the series unless a magical performance from the tourists on the day.