Shaun Marsh joins the Australian team for the upcoming game.

The Vidarbha Cricket Association Stadium in Nagpur, that boasts of a capacity of 45,000, will play host to the second ODI between India and Australia. The visitors, after the promising performance in the T20I series, seem to be in a spot of bother at the moment. They haven’t really found the right tempo in 50-overs cricket and their recent form suggests the same.

The Aussies have lost four out of their last five ODI games and their problems start right from skipper Aaron Finch. There are also a few questions about the combinations and the intricacies are in surplus. More than their bowling, it is the batting department which has been marred with uncouthness. Given that Steve Smith and David Warner will walk straight into the side after the bans are lifted, they should possibly figure out the remaining positions soon.

On the other hand, India seem to be in a great space in the 50-overs format. The fact that Virat Kohli said that it was a good thing being down to 99/4 in the first ODI gives you a brief idea of the preparations. The top-order is reliable as usual, the middle-order is coming of age. Moreover, there are no doubts about the bowling department. It’d be interesting to see if Australia could give some tough competition as they did in the T20Is.

The pitch in Nagpur could possibly have a lot of assistance for the spinners. Batting will be quite enjoyable as well given that one deals well against spin. It will be a sunny and hot day on Tuesday with the temperatures soaring all the way up to 34ºC. The pitch could be dry and the cracks could open up as the game progresses.

India might possibly make one change to the eleven that took the field in Hyderabad. KL Rahul could replace Shikhar Dhawan as the right-hander showed signs of good form in the T20Is. The remaining squad is likely to remain the same. Kuldeep Yadav might get another chance ahead of Yuzvendra Chahal while Rishabh Pant might have to continue warming the bench.

Shaun Marsh has joined the Australian team and he is likely to be slotted into the eleven straightaway. To fit him in, one of the wicket-keepers, Peter Handscomb or Alex Carey will have to make way depending on the batting order they’d prefer. Also, Marcus Stoinis might go back down the order at six or seven to add more balance to the batting order. The bowling attack is likely to be the same as in the first ODI.

India is predicted to win the match and take a 2-0 lead in the series. 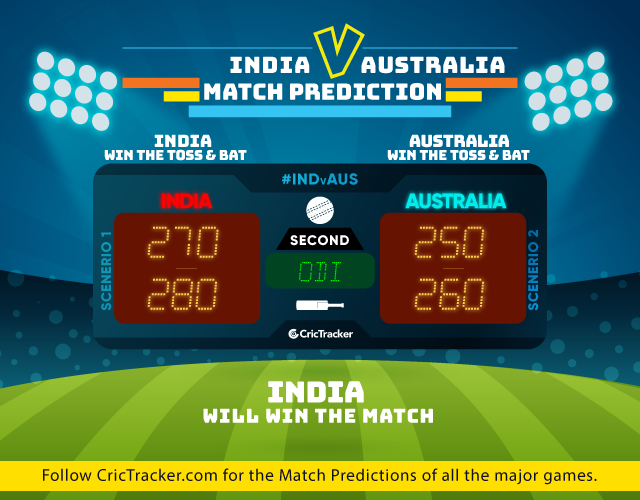