India have only won one game against the Aussies in Mohali out of four ODIs with their last victory coming way back in 1996.

After India’s victories in Hyderabad and Nagpur, it was Australia’s turn to hit back as they won the third ODI of the five-match series at the JSCA Stadium in Ranchi by 32 runs. The Indian bowling delivered in the first two matches, but came under the pump, courtesy of some fearless batting by the visiting team’s top order, consisting of the likes of Usman Khawaja, Glenn Maxwell and Aaron Finch.

Indian captain Virat Kohli stood tall and shepherded the national team with his 41st ODI century, but his valiant efforts went in vain. The fourth and penultimate One Dayer is now scheduled to be played tomorrow at the Punjab Cricket Association IS Bindra Stadium, Mohali and both the teams have all to play for. The Aussies have a great chance of drawing level and setting up a decider in Delhi.

The track at the venue has produced some high scoring affairs over the years and another batsman-dominated encounter can be expected. Out of 24 matches at the ground, 15 have been won by the team, batting first. Hence it won’t be a surprise if the teams opt to bat first after winning the toss.

Kohli told that India would experiment in the next two matches and it can mean that KL Rahul may finally get an opportunity. After sitting out for three games, Rishabh Pant will get an opportunity as MS Dhoni has been rested. Mohammed Shami injured himself and Bhuvneshwar Kumar is most likely to replace him. The likes of Ambati Rayudu and Shikhar Dhawan would be hoping to get their form back.

The Aussies will remain unchanged. Usman Khawaja and Aaron Finch are the openers with Shaun Marsh at number three. Peter Handscomb is slotted to come at number four with the swashbuckling Glenn Maxwell next in. The onus will also be on Stoinis and Carey in the middle order. Pat Cummins and Jhye Richardson are the fast bowlers with the spin duo of Adam Zampa and Nathan Lyon

The team, batting first is predicted to win the encounter. 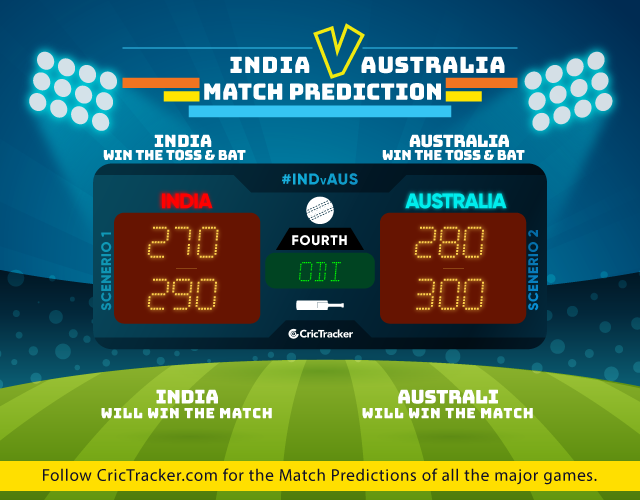