In 2019, India have lost four of five T20Is while defending targets.

The seven-wicket defeat at the hands of Bangladesh in Delhi has rung the bells in the India camp. It also brought an end to the Men in Blue’s 8-match winning streak over the Tigers. The second T20I at the Saurashtra Cricket Association Stadium in Rajkot is now a must-win encounter for the home team. Moreover, 2019 has been an indifferent year for India as they won 5 out of 11 matches.

Their record this year while defending hasn’t been great either, having won only one match out of 5. Bangladesh’s confidence would’ve sky-rocketed after the triumph in the opener. On paper, the Tigers are more experienced than India, something which was on show at the Arun Jaitley Stadium. Their youngsters weren’t overawed by the hosts, despite Shakib Al Hasan’s absence from the team.

The venue has hosted a couple of T20Is with India winning one of them. The average score is round 190. The track will be devoid of any grass, making it a belter. It’s also expected to offer true bounce, but it could show a different nature due to the persistent rain. There are chances of heavy showers in the morning until 12 PM, but the skies are most likely to stay clear during match-time.

The hosts may bench Khaleel Ahmed, who was expensive in the death overs in New Delhi. The left-arm pacer may make way for Shardul Thakur, who has prior experience of playing against Bangladesh. There is also an option of bringing in Rahul Chahar. The Tigers’ batsmen aren’t efficient players of wrist-spin, which was palpable from the way they played Yuzvendra Chahal.

Chahal has never conceded in excess of 24 runs versus the opposition. Rohit Sharma hasn’t had the best of years in T20Is. He averages a mere 23.88 with a couple of fifties in nine matches. Dhawan looked settled last time around. KL Rahul was jittery, scoring 15. Rishabh Pant was seeming to get the measure of the conditions, before getting out. Shivam Dube is likely to get another go.

The Tigers are unlikely to tinker with their winning combination. Mohammad Naim’s nerves would’ve relaxed after the start he gave to his team on debut. Liton Das disappointed though, throwing his wicket away to Deepak Chahar. Soumya Sarkar looked gutsy, scoring 39 in a 60-run partnership for the third wicket along with Mushfiqur Rahim, who is in red-hot form with the bat.

The spinners Afif Hossain Dhrubo and Aminul Islam Biplob tied down the Indian batters and they will be looking for something similar in Rajkot. Al Amin Hossain didn’t get a wicket, but gave away only 27 runs in his quota. Shafiul Islam leaked 36 runs, but prized out the scalps of Rohit and Pant. It will be interesting to see how the visitors use Mustafizur as he bowled only two overs last time. 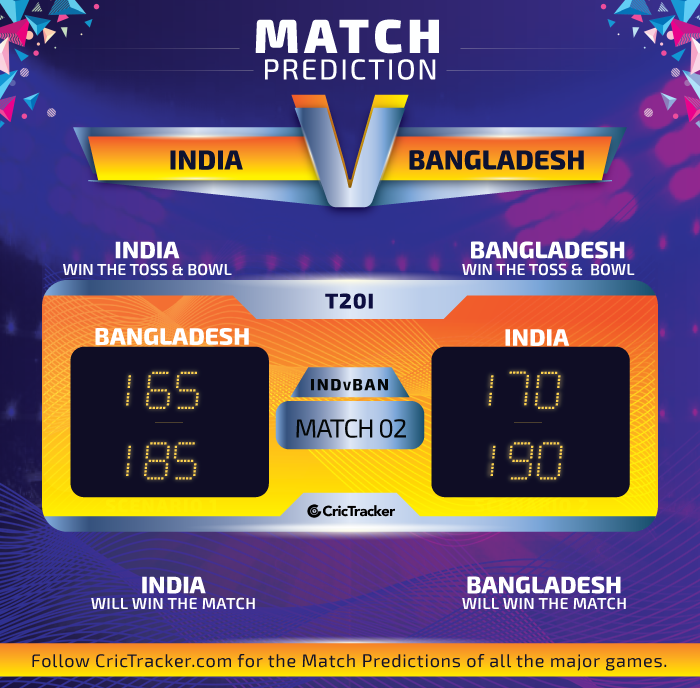