The Indians have been quite successful on England tours in the past.

India will play a three-match one-day international (ODI) series after a three-game Twenty20 series and before a big five-match Test series during their upcoming tour of England starting July 3. The three ODIs will be played at Trent Bridge, Lord’s and Headingley on July 12, 14 and 17, respectively.

India’s rivalry with the Englishmen in the 50-over format (earlier 60/55 over format) is although not as eventful as the 85-year rivalry in Tests, but still there have been memorable moments in the history of their competition in the ODIs which started in 1974 when they played their first-ever bilateral series. India and England have played 96 ODIs against each other with India winning 52, England 39 while two have been tied and three ending without a result.

Here we take a look at all the bilateral series the two countries have played since 1974 when India were beaten 2-0 by England in a two-match series played for the Prudential Trophy. The two teams played 18 bilateral series so far with India winning nine, England seven and two ending in draws. 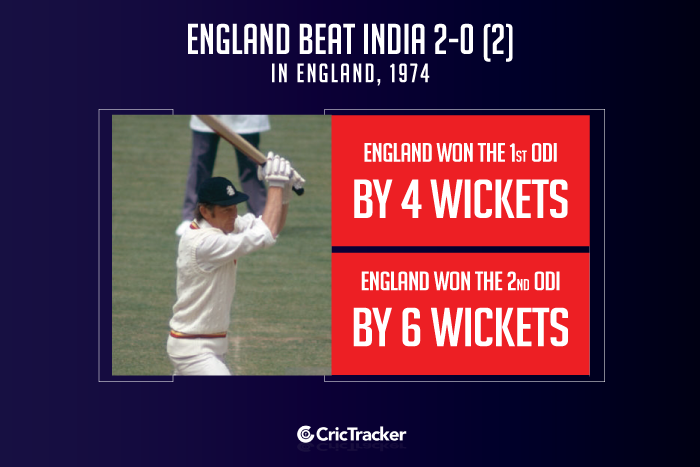 This series marked India’s debut in ODIs though Ajit Wadekar’s side lost both the games played at Leeds (by 4 wickets) and the Oval (by 6 wickets), respectively.  England were well-served by medium-fast bowler Chris Old, who took 6 wickets in two games. England were led by Mike Denness in this series which saw two players getting picked for the man of the series award: Keith Fletcher for England and Brijesh Patel for India.