England leads India when it comes to T20 Internationals.

India and England have known to be time-tested rivals in the Test and one-day international (ODI) arena but of late, they have also been locking horns regularly in the Twenty20 format. India’s upcoming tour in England will begin with a three-match T20 series between July 3 and 8 (at Manchester, Cardiff, and Bristol) before they go into the ODI and Test series. The Indians will be led by Virat Kohli will the hosts will be playing under the leadership of Eoin Morgan.

The Indians and England have played five bilateral T20 series so far (though three of them were a one-off match series) besides in multi-side tournaments like World T20 with England winning three of them, India one and one ending in a draw. England lead 5-3 in T20 matches played in bilateral series. India have never beaten England in a T20I in England. 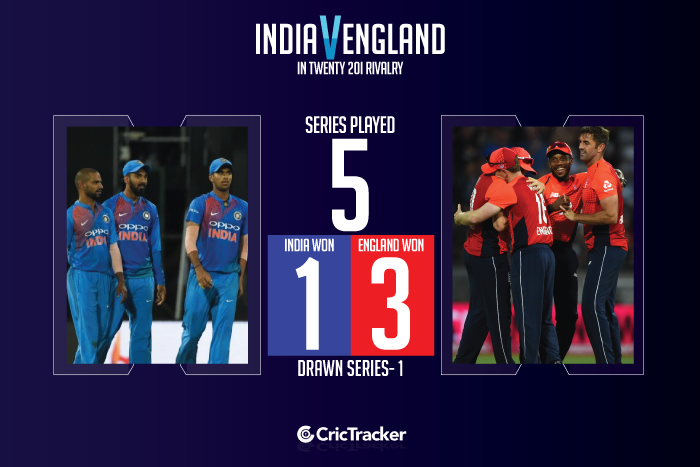 Here we take a look at the brief results of all the T20 series that India and England have played so far: 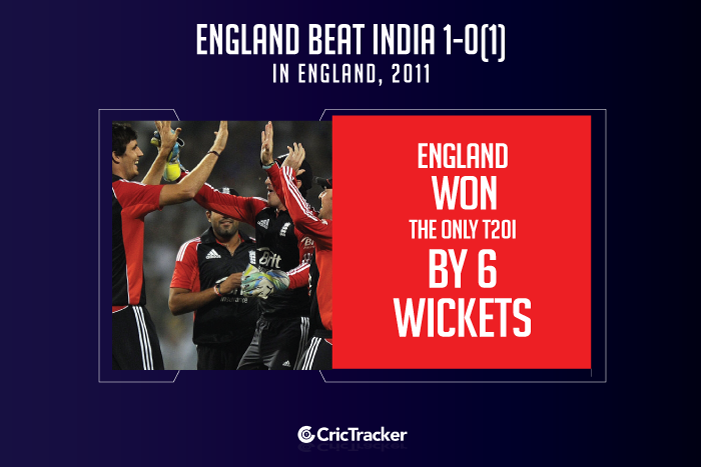 England beat India 1-0(1) in England, 2011: India were routed 0-5 in Tests and 0-3 in ODIs and they were also beaten by 6 wickets by England in the only T20 played in at Old Trafford in Manchester. Mahendra Singh Dhoni won the toss and elected to bat and India was bowled out for 165 inside 20 overs, thanks to fast bowler Jade Dernbach’s 4 for 22. 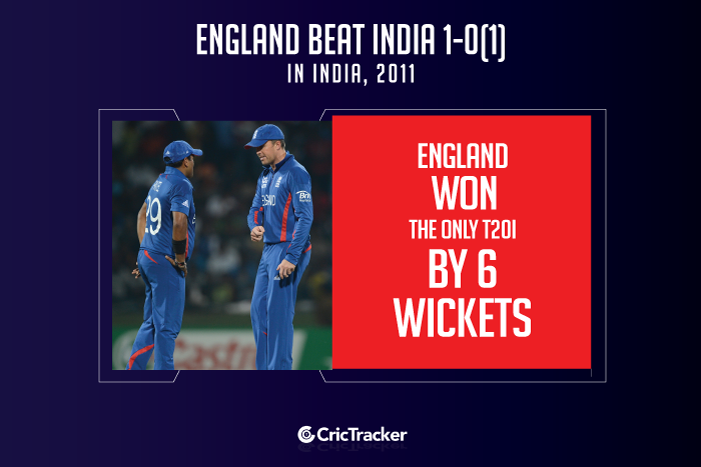 England beat India 1-0(1) in India, 2011: MS Dhoni’s men took a sweet revenge of the ODI loss against England in England earlier that year by walloping them 5-0 at home but in the T20 game that followed, the then T20 world champions beat India by 6 wickets at the Eden Gardens, Kolkata. Dhoni won the toss and elected to bat but the English fast bowlers – Steven Finn and Tim Bresnan — had never allowed the hosts to get off with the game.

India struggled to reach 120 for 9 in 20 overs after reeling at 8 for 91 at one stage but that was never going to be enough as the man of the match Kevin Pietersen’s 53 guided them to victory in the 19th over. Virat Kohli took one of his four T20I wickets in this game. Spinner Graeme Swann was in charge of England in this match. 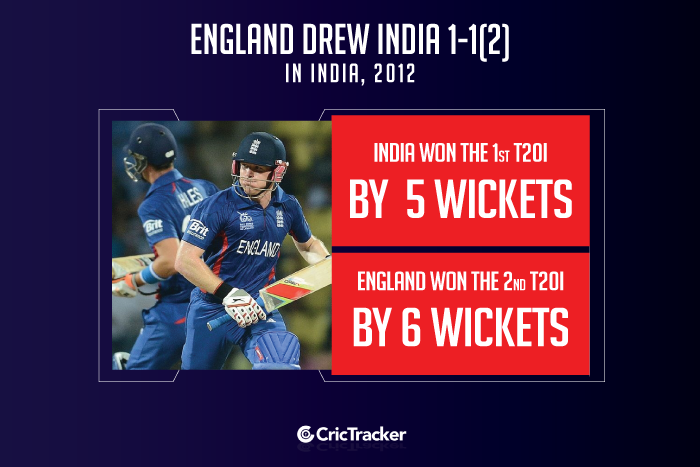 England drew India 1-1(2) in India, 2012: After losing the Test series 1-2 even after leading, MS Dhoni’s men showed some intent to win the two-game T20 series by winning the first match in Pune by 5 wickets. But England, led by Eoin Morgan, came up with a determined batting display to chase down a target of 178 successfully in the second game in Mumbai in the final delivery to level the series. Yuvraj Singh was adjudged the man of the series because of his all-round show (he took six wickets in the series). 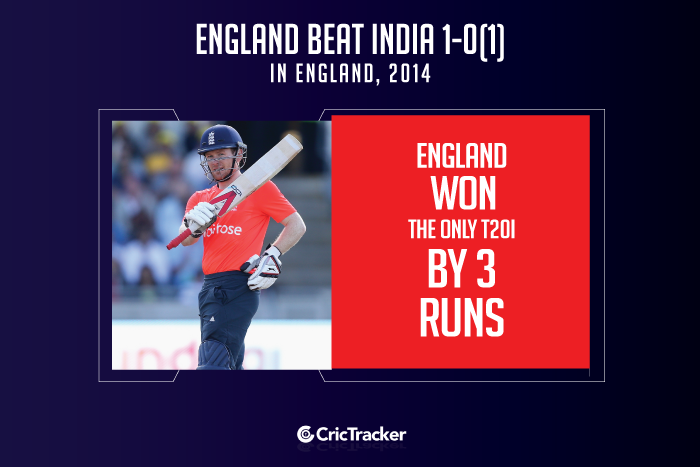 England beat India 1-0(1) in England, 2014: This tour of England by the Indians was enthralling as both sides won by identical margins (3-1) in the Tests and ODIs and were looking forward to winning the only T20I played at Edgbaston, Birmingham. England captain Eoin Morgan won the toss and chose to bat and himself scored 71 off 31 to power his side to 180 for 7 in 20 overs.

Mohammad Shami was the most successful bowler for India, taking 3 wickets for 38 runs. The Indians was well on their way to achieve the target but lost their way towards the end and fell just three runs short of England’s total, losing five wickets in the process. Virat Kohli scored 66 off 41 balls while Dhoni left stranded at unbeaten 27 to witness India failing to win yet another T20 series against England. 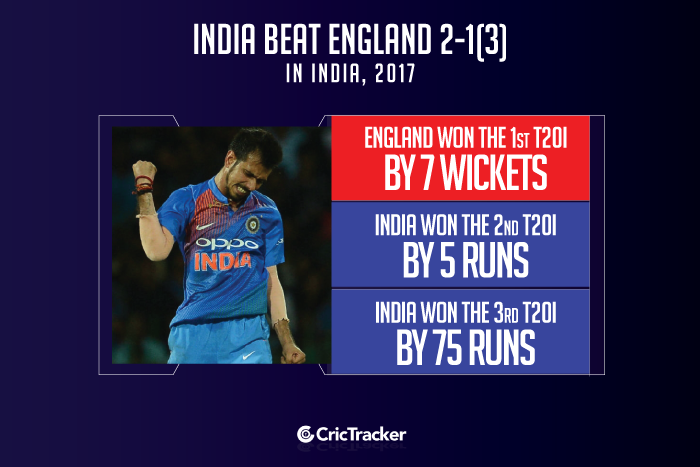 India beat England 2-1(3) in India, 2017: India finally won a T20I series against England in 2016 when they came from behind to pocket a three-match series 2-1. Led by Virat Kohli this time, the Indians followed up their 4-0 win in Tests and a 2-1 victory in the ODIs with a convincing show in the T20Is as well.

The Indians lost the first game in Kanpur by 7 wickets but leveled the series in Nagpur by defending a modest total and winning the game by 5 runs. India then had an unbelievable win in Bengaluru where Yuzvendra Chahal spun the visitors out of the game by taking 6 wickets for 25 runs after the Indians set a target of 203, thanks to a couple of half-centuries from Suresh Raina and MS Dhoni. England lost their last eight wickets for eight runs to lose the game by 75 runs, their fifth heaviest defeat in T20Is by runs. Chahal was picked the man of the series also beside the man of the match in the third T20I.