India vs England: Uttarakhand Police takes a dig at Virat Kohli for getting out on a duck in the first T20I

India vs England: Uttarakhand Police takes a dig at Virat Kohli for getting out on a duck in the first T20I

Virat got out to Adil Rashid in the third over of India's innings.

Virat Kohli, the Indian skipper, had a torrid time in the opening T20I against England at the Narendra Modi Stadium in Ahmedabad. Neither could he save India from an eight-wicket defeat, nor could he perform with the bat in hand. He came to bat in the second over after Jofra Archer castled KL Rahul for one. Kohli had a massive task at hand since he’s the skipper of the national team.

However, he was unable to open his account and got out for a five-ball duck. Leg-spin bowler Adil Rashid got rid of him in the third over. Virat tried to clear mid-off, but couldn’t get his timing right. In the end, he holed out to Jordan, who didn’t have to move much to take the catch. In the meantime, Uttarakhand Police took a sly dig at the 32-year-old Indian skipper.

Sharing Virat’s picture, they stated that apart from donning the helmet, people should also be careful about driving. “Wearing a helmet isn’t enough. One also needs to drive in his/her senses. Otherwise, you can also get out for a duck like Kohli.” 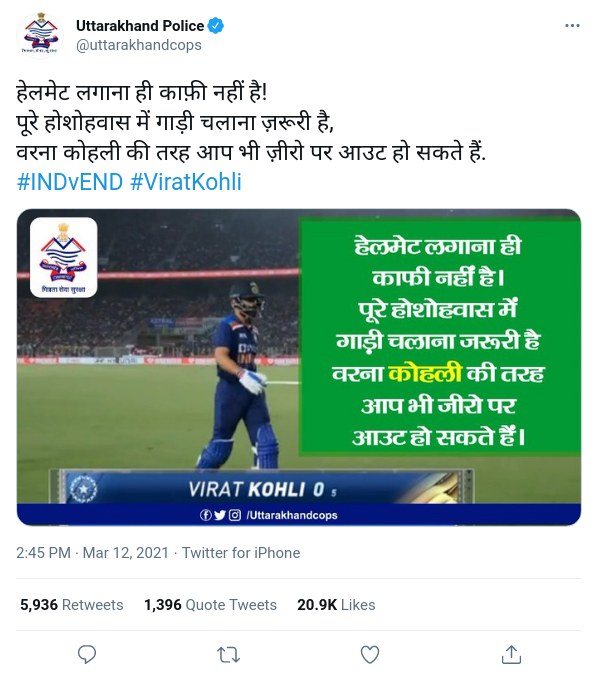 For me it is about trying to be positive: Virat Kohli

India lost the match after posting a mere 124 mostly courtesy Shreyas Iyer’s 48-ball 67 with eight fours and one six. Iyer held the Indian innings after the hosts lost four wickets in the 10th over at the score of 48. Apart from lauding Iyer, Virat said that he himself prefers to take the attack to the opposition.

“We did not give ourselves enough time to assess the conditions, Shreyas did that but there were too many wickets down to get past 150-160. It is part of the whole journey of international cricket. When you have played for that long you will have your ups and down, you have to accept that as a batsman,” Kohli said after the game.

“On your day you will probably much more for the team. At the end of the day you have to keep true to your intent and plan as a batsman, understand sometimes the bowling team will come out and execute their plans better. For me, it is about going out there and trying to be positive as I can. It is not tough (changing formats), we have done it in the past,” he added.