For India, the Pandya brothers and the Chahar brothers are likely to make it into the eleven.

Keeping the T20 World Cup 2020 in mind, Team India is scheduled to play a lot of T20I cricket in the next few months. For a side that doesn’t play a lot of 20-over cricket at the international level, it is going to be great preparation. Virat Kohli and his men weren’t tested in the series against West Indies recently. However, another strong opponent in the form of South Africa awaits as both these teams gear up for a three-match series.

South Africa and India are almost neck-and-neck in terms of the standings in the ICC T20I rankings. While the Proteas are placed third with 262 ratings, India is fourth with 261 ratings. For this series, Quinton de Kock will lead the Proteas in the absence of Faf du Plessis. On the other hand, India’s bowling line-up seems slightly inexperienced as most of the players have not played much at the highest level. It should be an interesting series to watch and one could expect both these teams to compete really hard.

We move to the north of India – to the beautiful Dharamshala – for this encounter. The ball usually flies off the bat at this venue. Boundaries are quite short and we are surely up for a run feast. While there is a chance of precipitation in the morning and afternoon, it will all clear up by the time the match starts. The high humidity levels will quicken the pitch and the ball should come onto the bat nicely. As a bowler, the best chance to pick wickets is when the ball is new. Later in the innings, batsmen can comfortably hit through the line.

Team India is likely to leave out Khaleel Ahmed and KL Rahul for this game. Also, the captain and the management must make a pick between Shreyas Iyer and Manish Pandey. Both of them are in great form and it is quite a tricky situation here. Same is the case with Washington Sundar and Ravindra Jadeja. Rishabh Pant will continue to keep wickets while Rohit Sharma and Shikhar Dhawan will open the innings. Navdeep Saini and Deepak Chahar will be the two front-line pacers. Hardik Pandya is also expected to make a comeback into the side.

Quinton de Kock will be leading the side and will open the innings with Reeza Hendricks. Rassie van der Dussen will get an opportunity to bat at three in place of Faf du Plessis. He will be followed by Temba Bavuma and David Miller. Depending on the conditions and situations, the management might pick one between George Linde and Dwaine Pretorius. Tabraiz Shamsi will be the spinner in this side.

India is expected to win this game and take a 1-0 lead in the series. 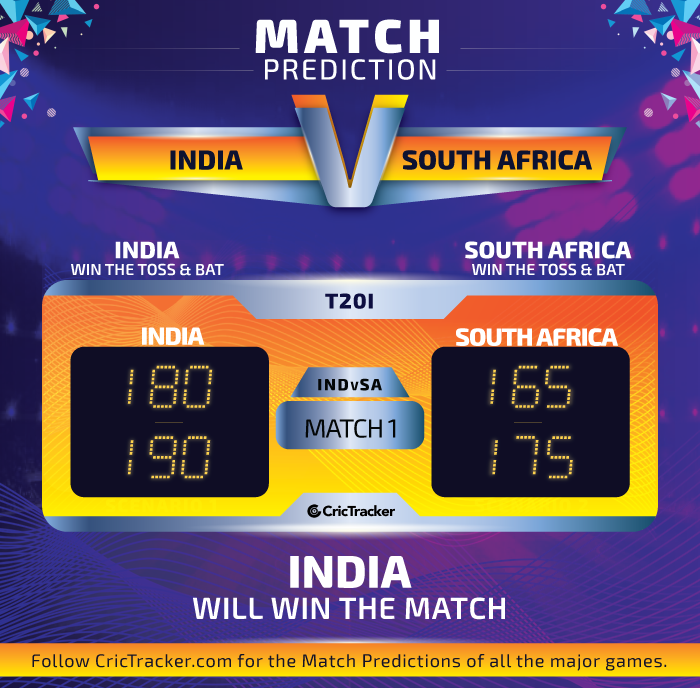