David Miller could be a decent pick given his record in Mohali.

The 2nd of the three-match T20I series will be played between India and South Africa at the Punjab Cricket Association, IS Bindra Stadium in Mohali.

The first T20I between the two teams was washed out due to heavy rains in Dharamsala. It has turned this series effectively into a two-match contest and the winner of this game will not lose the series. Both the teams will be hoping for some action in Mohali as their preparation towards the T20 World Cup 2020 starts.

Virat Kohli has clarified already that the youngsters will have to prove themselves in four to five chances and the likes of Deepak Chahar and Rahul Chahar will be eyeing to impress the skipper with their performances. Given the fact that the match is being played in Mohali, the Men in Blue might opt to go with an extra pacer which can also open the door for Khaleel Ahmed to play. But as of now the leggie Chahar looks the favourite to make it to the XI.

For South Africa, Quinton de Kock had to wait for more to officially lead his team in a full series for the first time. He will be itching to start the tour with a win. But for that to happen, the experienced players have to put their hand up and then hope for the youngsters to come into their own.

The weather forecast is set to be clear for this match which is great news. There is only a 5% chance of rain but that should not bother the officials and the groundsmen. The temperature is expected to hover around 28-30 Degrees Celsius during the match.

The Mohali surface has something in it for the pacers always and has got some bounce as well. The pitch is good for strokeplay as well and the average first innings score of 184 in four T20Is proves it. With the dew expected to play its part, the teams are likely to bowl first after winning the toss.

David Miller comes into his own in Mohali which is home ground in the IPL while playing for the Kings XI Punjab. He has scored 628 runs in 25 innings at an average of 41.87 and the strike-rate of 150.96 at the venue.

Rohit Sharma and Virat Kohli no doubt hold key to India’s line-up and their tally of 4791 T20I runs together proves it. 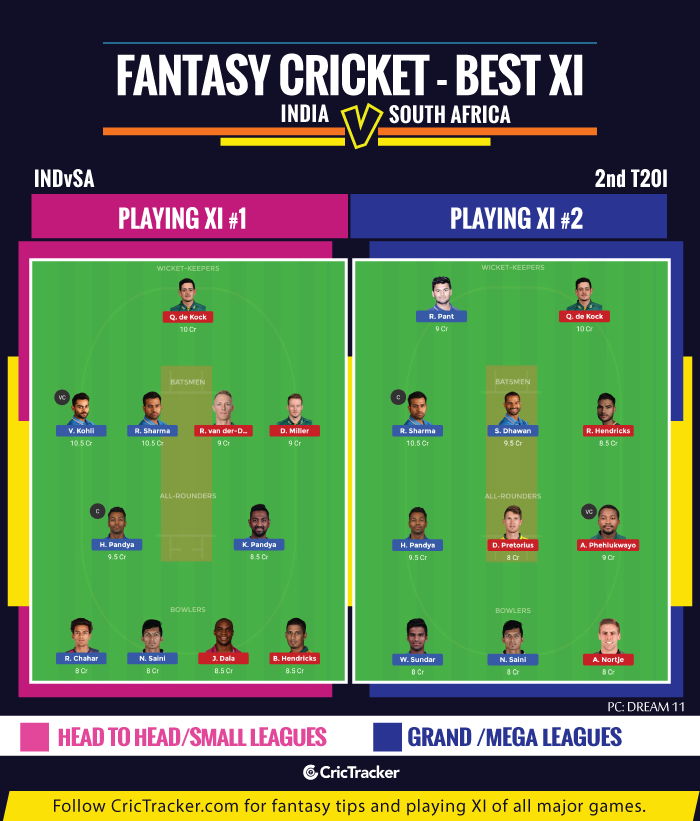 With the new points system in place, the all-rounders will make a huge impact. The likes of Hardik Pandya and Andile Phehlukwayo should be a good option for C or VC.

David Miller could be made at least VC in grand league contests.

India are expected to take a 1-0 lead in the series but expect South Africa to make it extremely tough for the hosts.