Shreyas Iyer has made half-centuries in both the T20Is.

India and Sri Lanka will play the third and the last T20I of the ongoing series on Sunday at the Himachal Pradesh Cricket Association Stadium, Dharamsala. India have already won the first two matches and this would be a dead rubber. The first match was a one-sided affair as India managed to win the match by 62 runs after scoring 199 runs for the loss of two wickets in 20 overs.

In the second match, the Sri Lankan batters did show some resistance as they managed to score 183 runs for the loss of five wickets in 20 overs. They scored 80 runs in the last five overs which indicated that India might still not have sorted the death over bowling. The batters did continue from where they left in the first match. The openers couldn’t do much as Rohit Sharma made one run and Ishan Kishan made 16 runs before getting dismissed. Shreyas Iyer along with Sanju Samson came to the rescue and the duo added 84 runs off just 47 deliveries. In the end, Ravindra Jadeja made a great cameo as he scored 45 runs off 18 balls and India won the match by seven wickets. Iyer made 74 runs off 44 balls and won the player of the match award.

The pitch is likely to remain really supportive to the batters throughout the match. The bowlers would have to do extra work to pick wickets in this game.

Ishan Kishan and Dinesh Chandimal sustained injuries in the last match. Their participation in this game is in doubt.

Shreyas Iyer has made two back-to-back half-centuries in the series. In the second match, he helped the team win the match and also won the player of the match award. He is likely to play a key role in this game as well and should be there in your fantasy team.

Rohit Sharma made 44 runs off 32 deliveries in the first match and added 111 runs for the first wicket along with Ishan Kishan. Their innings set a platform for the middle-order and India reached 199 runs for the loss of two wickets. In the second game, Rohit could make only one run and would be looking to score runs in the third match.

Ravindra Jadeja played the role of a finisher perfectly in the last game. He scored 45 runs off 18 deliveries and helped wind up the game in just 17.1 overs. Jadeja hit seven fours and one six in the match.

Deepak Hooda made his T20I debut in the first T20I and is yet to face delivery in this series. This being a dead rubber, he might get his chance, and hence, Hooda should be there in your team.

Bhuvneshwar Kumar has picked three wickets in two matches at an average of 15, an economy of 7.50, and a strike rate of 12.

Sanju Samson made 39 runs off 25 deliveries in the last match and added 84 wickets for the third wicket along with Shreyas Iyer. Samson has received a lot of backing from the Indian skipper Rohit Sharma and might get promoted up in the batting order.

IND vs SL Must Picks for Dream11 Fantasy Cricket: 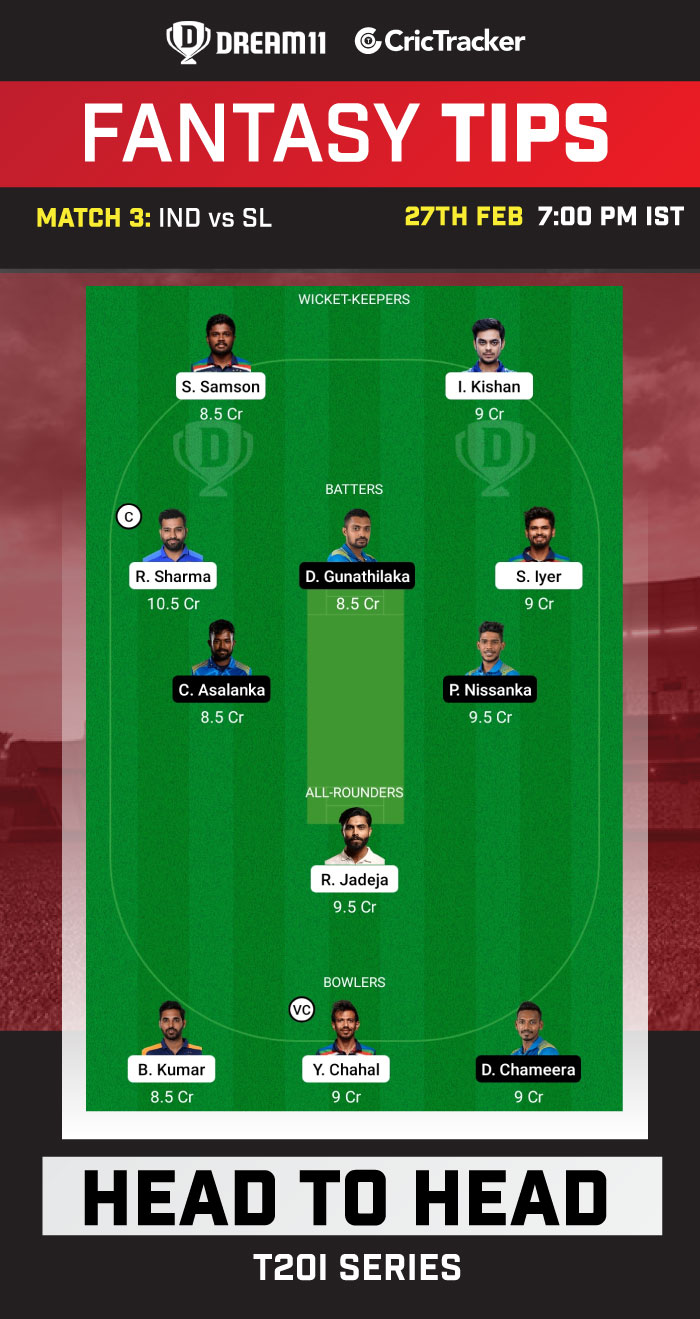 Pathum Nissanka made a duck in the first match and followed it up with 75 runs off 53 deliveries in the second match. It might be a risk to pick him as the captain of your fantasy team.

Dushmantha Chameera has managed to pick only a single wicket in two matches in the series. His economy is 11.3 which makes him a risky choice as the captain of your fantasy team.

Harshal Patel gave away 52 runs in four overs and picked a single wicket. India might look to replace him in this game to test the bench strength and hence, you can avoid him.