Nicolas Pooran is still serving his ban and will miss the first T20I.

India won the toss and opted to bowl first

The 1st T20I of the three-match series between India and West Indies at the Rajiv Gandhi International Stadium in Hyderabad.

The match starts at 07:00 PM IST (01:30 PM GMT). This match will be broadcasted on Star Sports. Live Streaming will be available on Hotstar.

Another T20I series is set to kickstart between India and the West Indies as the Men in Blue lock horns with the 2016 World T20 champions it the first of the three T20Is in Hyderabad on December 06.

This is the third T20I series between India and West Indies in the past 12-13 months and the Men in Blue will look to continue with their winning streak against the tourists that has seen them win six games on the bounce. Apart from the result, this series will more be about India trying to lock in a few positions as they aim to build the squad for next years’ T20 World Cup in Australia.

West Indies, on the other hand, will hope they turn the tide as far as fortunes are.concerned in the shortest format of the game. The 2016 champions have been really struggling in T20 cricket in the last two years. In the past 23 T20Is, the West Indies have lost 18 and have won just five. They come into this series on the back of a 1-2 series loss at the hands of Afghanistan and another trial by spin awaits them against India.

With no signs of rain, we are in for a full match of T20 cricket in Hyderabad. According to AccuWeather, the temperature is expected to range between 15-26 degrees celsius.

The track at the Rajiv Gandhi International Stadium can range from an absolute belter to a slow burner, where spinners and slower bowlers rule the roost. Both tracks will be looking to bowl first and try and chase down the target. This is also the first T20I at the venue.

Nicolas Pooran is still serving his ban and will miss the first T20I.

India-  As far as the batting is concerned, all eyes will be on KL Rahul- the opener. The right-hander is coming off a half-century in the last T20I against Bangladesh and a fruitful domestic T20 tournament. He, along with Rohit Sharma, Virat Kohli, and Shreyas Iyer, who scored a match-winning half-century in the last match, will be the key to India’s fortunes.

Deepak Chahar, who claimed 6/7 against Bangladesh will be uniting with his mentor Bhuvneshwar Kumar and it will be interesting to see how the duo works in tandem.

West Indies- One of the major reasons behind the failure of the West Indies against Afghanistan was the inability of their batsmen- barring Evin Lewis (106 runs in 3 games)- to post scores of some substance. The likes of Lendl Simmons, Shimron Hetmayer and skipper Kieron Pollard will have to step up to the party if they want to have any chance against strong Indian bowling.

Kesrick Williams (8 wickets in 3 games) was the leading wicket-taker against Afghanistan. He, along with Jason Holder and Keemo Paul will lead the fast bowling department while leg-spinner Hayden Walsh Jr could turn to be an X-factor. 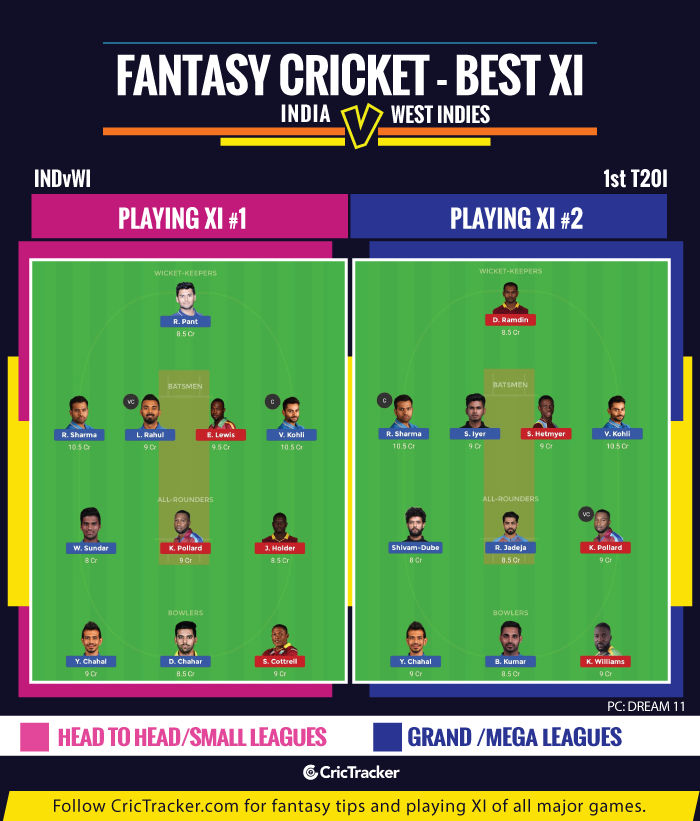 Wrist-spinners have time and again ruled the roost in T20 cricket. Considering, the West Indies usually struggle against it, picking the likes of Chahal as captain of your Dream11 Grand League team could be worth a punt.

India are run-away favourites to win this one.