India and West Indies will lock horns in the second ODI of the three-match series in Visakhapatnam. This is also a must-win encounter for the home side and more often than not, they have managed to fight back strongly after being pushed to the corner. The series opener turned out to be a great outing for the Caribbeans who backed themselves to bowl first after winning the toss when many questioned the decision.

They first restricted India under 300 thanks to the rare failure for their top-order and then Shimron Hetmyer and Shai Hope helped the visitors get to the target in a canter. Kieron Pollard has led the team well ever since taking over the reins and the Men in Maroon are on a four-match winning streak in the format now.

On the other hand, India have now lost four ODI on the trot at home and it will be interesting to see how they respond to his calamity. There is no doubt that the fielding needs to improve leaps and bounds while the bowling has also been under the pump this season in the shorter formats.

The surface at the Vizag has traditionally been a turner. The spinners are expected to come into the game very early. Having said that, the batsmen will be able to score runs if they apply themselves better. It shouldn’t be a surprise if India play three specialist spinners in Kuldeep, Jadeja and Chahal in this match. The team winning the toss is expected to bat first though there is a chance of dew making an impact in the evening.

There are no issues with India’s batting though the top-order endured failure in the series opener. It is only a matter of time always about them clicking and Rohit Sharma and Virat Kohli will be itching to do so in the must-win game. Rishabh Pant needs to be consistent now after scoring a vital half-century in Chennai. The likes of Deepak Chahar, Kuldeep Yadav and Mohammed Shami are also expected to retain their places.

However, poor returns from Jadeja and Shivam Dube should worry the Men in Blue. Both of them were ineffective with the ball and couldn’t do much with the bat either. The latter might have to sit out with the series on the line and we might Yuzvendra Chahal getting a chance in the playing XI.

The Caribbeans have been playing some amazing cricket in the 50-over format and they have no reason to change their combination. Shai Hope played the anchor’s role to perfection in the first ODI while Hetmyer has struck form at the right time. Kieron Pollard and Nicolas Pooran are always a force with the bat. There might be a temptation to include Brandon King in place of Sunil Ambris but the latter is likely to get another chance.

The bowling attack led by Sheldon Cottrell is doing well too. Though Hayden Walsh’s form will worry the tourists who has been put under immense pressure by the Indian batsmen on this tour. 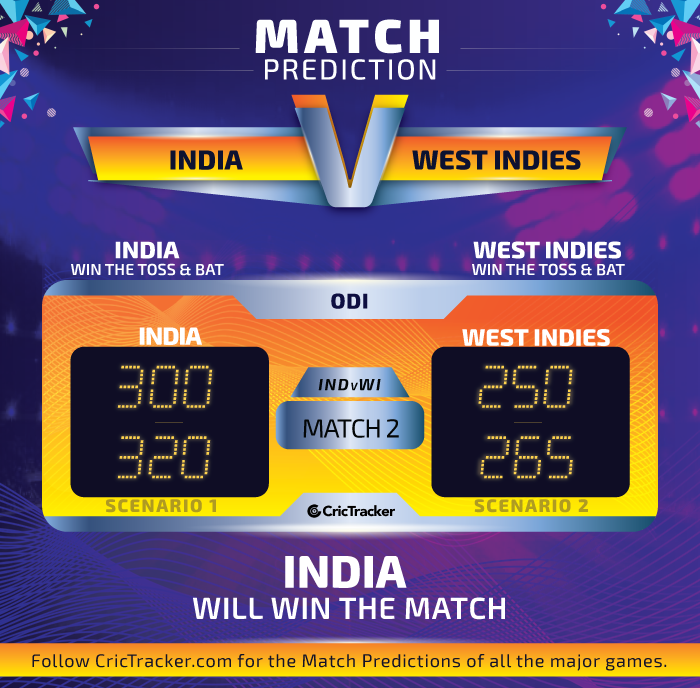