Last time India played an ODI in Cuttack, the new ball swung and their top three was dismissed with only 25 runs on the board.

India won the toss and elected to bat first.

The 3rd ODI of the three-match series between India and West Indies will be played at the Barabati Stadium in Cuttack.

The match starts at 1.30 PM local time & IST (8:00 AM GMT). This game can be viewed on Star Sports 1 and Star Sports 1 HD. Live Streaming will be available on Hotstar.

So, it is time yet another decider between India and West Indies. The visitors have fought well on this tour against the formidable Indian line-up and after losing the T20Is, the Caribbeans would be keen to leave the country with their second consecutive ODI series win. After coming second in the series opener, India’ batting powerhouse clicked in the must-win game as the Men in Blue levelled the series.

Coming into the decider, the West Indies will look to improve their death bowling which has gone for plenty of runs in the last two matches. India, on the other hand, have been struck with a huge blow as Deepak Chahar has been ruled out of this game due to a back injury. Navdeep Saini is expected to replace him in the playing XI.

The weather forecast is perfect in Cuttack on Sunday. Sun will be out when the game will get underway while there is no chance of rain at all. The temperature will gradually decrease as the match progresses and settle down to around 21-22 Degrees Celsius in the evening.

Last ODI was played in January 2017 at this venue when Yuvraj Singh and MS Dhoni had smashed centuries against England. India had scored 381 runs batting first and even England had reached within 16 runs of the winning target in the chase. Another batting beauty could be on offer at the Barabati stadium while the new ball might swing for the first few overs when a couple of wickets are likely to fall before the batsmen take over.

Average first innings score: 245 (In 18 ODIs played at the venue)

Deepak Chahar has been ruled out of this match. Navdeep Saini has replaced him in the squad.

As usual it is, Rohit Sharma and Virat Kohli has to be your top picks when India plays across any format these days. The Indian captain is due a big knock which might come in the deciding ODI. Though Kohli has scored only 33 runs in three matches at the venue. Shreyas Iyer is another attractive pick in the batting department who can score big if he comes out to bat early. Shami and Kuldeep will be key with the ball.

For the West Indies, picking Shai Hope should be a no-brainer while Nicolas Pooran is also in great form. Hetmyer is somewhat inconsistent and might have exhausted his quota of scoring runs on this tour. Having said that, he is batting very confidently after the heroics in the series opener. Sheldon Cottrell is the only Caribbean bowler who has done well in this series. 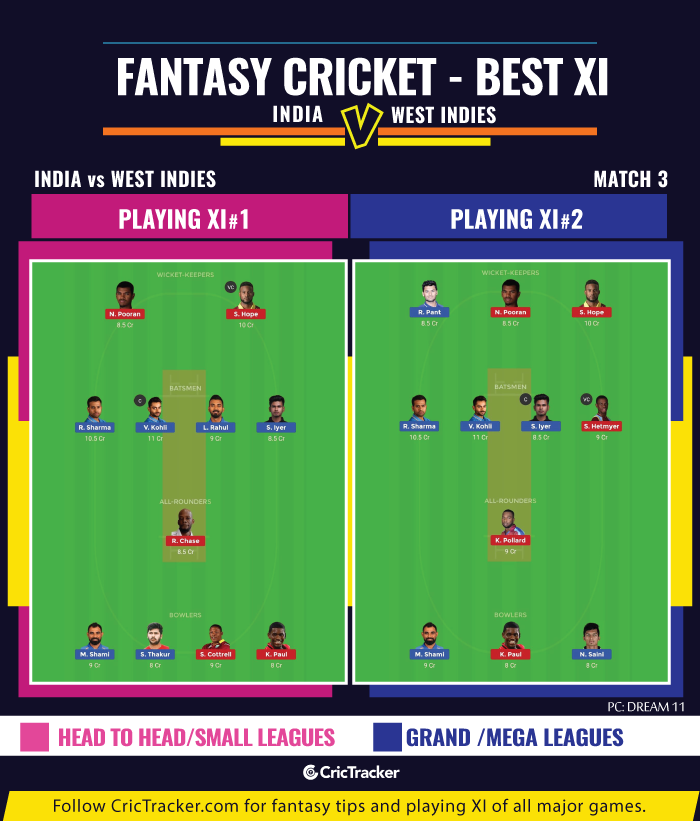 Last time India played at the venue, the new ball swung a bit and their top three was blown away. Considering the same case, it would be better to have Iyer in the team and you can even go for Rishabh Pant instead of KL Rahul just to have that middle-order back-up.

India are expected to win the match and seal the series 2-1.