The Men in Maroon have endured a horrendous time so far in this tour, having lost all five games so far.

West Indies will have nothing but pride to play for as they take on India in the third and last T20I of the series. The Men in Maroon have endured a horrendous time so far in this tour, having lost all five games so far. Nonetheless, they would like to do well in order end their campaign on a winning note. On the other hand, India, who clinched the ODI series 3-0, won’t mind scripting another clean sweep.

Meanwhile, the second T20I went right down to the wire as West Indies, chasing 187, were in the hunt for the best part. However, Indian bowlers held their nerves in the crunch overs and took their side over the line. With the hosts enjoying an unassailable 2-0 lead, they can make some changes in their line-up. As far as West Indies are concerned, they must focus on the positives.

Considering the first two games, the Eden Gardens track has been pretty even so far. The likes of Ravi Bishnoi and Roston Chase have been able to generate spin from the surface. At the same time, dashers like Rohit Sharma, Nicolas Pooran and Rovman Powell have enjoyed batting on the same track. With the dew coming into play, the toss-winning captain must elect to field first.

IND vs WI Head to Head

West Indies vice-captain Nicholas Pooran has been at his best in this series, having scored half-centuries in the first two games. Coming to bat at number three, the southpaw has brilliantly tackled the Indian skippers on a tough surface. He has also played some delightful shots amid the big dimensions of the venue. Hence, the Men in Maroon would be counting on him.

Having made his international debut in this series, Ravi Bishnoi has already proved that he belongs to the highest level. The young leg-spinner has bowled exceptionally well against a daunting West Indies line-up, picking three wickets in the first two T20Is. Moreover, his overall economy rate has been below six.

Prediction: India is expected to win the third T20I 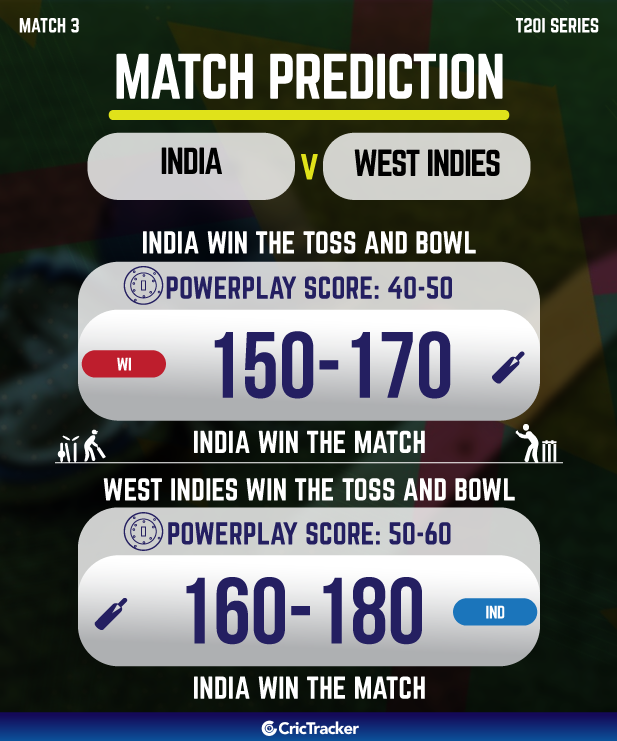