Georgia Elwiss has been ruled out of the T20I squad due to a stress fracture.

India Women have been outdone in the T20I series against England Women. After reigning supreme in the 50-overs format, the hosts, led by Smriti Mandhana, came nowhere close to the expectations in the shortest format of the game. While they lost by a huge margin in the first match, the second game did go down to the wire.

However, the Heather Knight-captained Brits held onto their nerve in crunch situations and thus clinched the series with one match left. The visiting team will now look for a clean sweep in the series to finish this tour off on a high. India, on the other hand, will push for a consolation win in the dead rubber.

The 3rd and final game of the 3-match T20I series between India Women and England Women will be hosted by the Barsapara Cricket Stadium in Guwahati.

The pitch is decent to bat on. Spinners will be able to find some help from the track.

Georgia Elwiss has been ruled out of the T20I squad due to a stress fracture.

Ekta Bisht picked 15 wickets in her last eight T20Is. He took 2+ wickets in six of those eight matches and went wicketless twice. 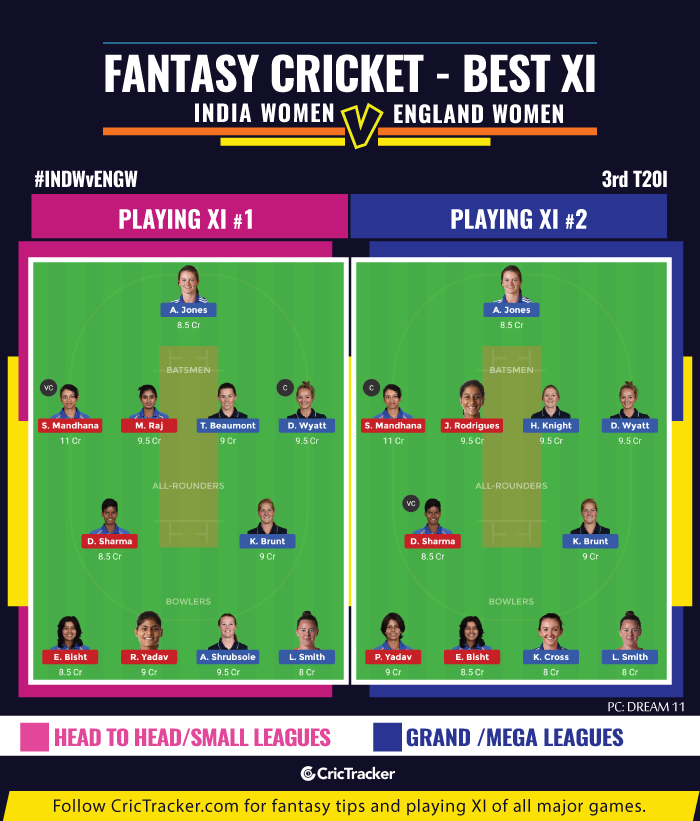 Heather Knight and Natalie Sciver haven’t bowled much in the series. Knight can be picked for her batting but Sciver is too costly to afford a failure.

England Women are predicted to win this match.