Again the team combination of your fantasy team might change depending on who bats first.

The 2nd game of the 3-match ODI series between India Women and South Africa Women will be hosted by the Reliance Stadium in Vadodara.

Priya Punia, the debutant, was the star of India Women in the first ODI as she remained unbeaten on 75 in the 165-run chase. The hosts are leading the three-match series 1-0 and will be looking to seal the contest when they take the field on Friday. India’s bowling attack was as usual at its best with Jhulan Goswami, Ekta Bisht, Shikha Pandey and Poonam Yadav picking wickets at regular intervals.

South Africa Women once again lost the battle against spin. They weren’t at their best and apart from Laura Wolvaardt and Marizanne Kapp, no batter looked assured in the middle. The skipper Sune Luus will hope that her troops redeem themselves in the second ODI to keep the series alive.

The weather is absolutely clear for the match to take place on Friday. The sun will be out for the whole duration of the match and the temperatures will soar as the day progresses. It will hover around 28 to 36 Degrees Celsius in Vadodara according to AccuWeather.

The surface on offer was a decent one for the first ODI. There is a little bit of turn in the pitch and the slow bowlers will continue to have their say. More so, if the same strip is used, then the spinners will extract more turn from the 22 yards. Expect the team winning the toss to bat first.

Ekta Bisht, Deepti Sharma and Poonam Yadav will definitely pick wickets with the ball as South Africa struggle a lot against spin. Depending on when India is batting, the likes of Mithali Raj and Harmanpreet Kaur could be picked.

Laura Wolvaardt looks a much better ODI batter than the T20I and should be a very good pick. Also, Trisha Chetty and Du Preez could be crucial. Expect Lizelle Lee also to get going from the word go. 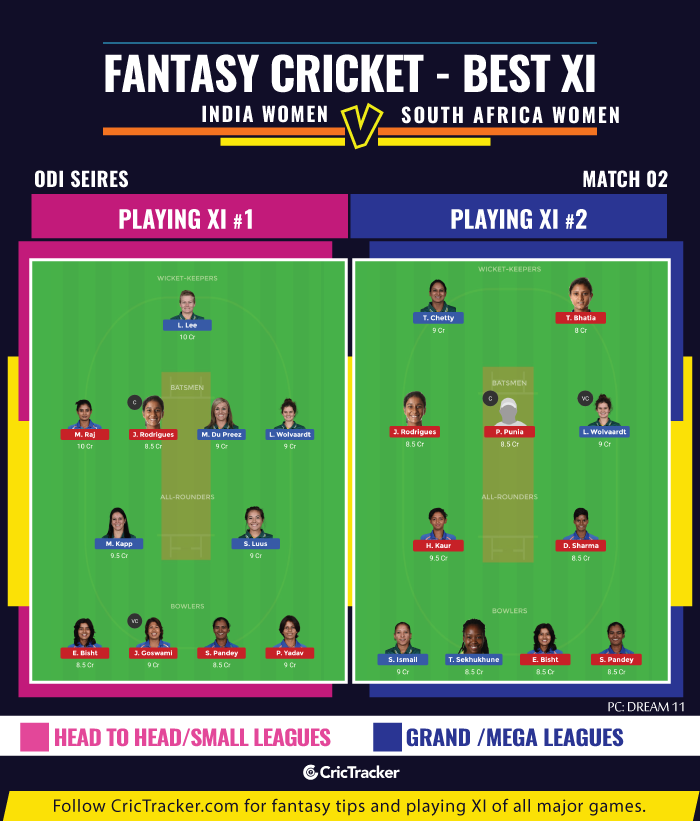 Again the team combination of your fantasy team might change depending on who bats first. If India bats first, making the likes of Mithali, Kaur C or VC. But India are bowling, better pick as many bowlers as you can from the hosts’ team.