India Women might make a few changes to their line-up and it would be wise to wait for the playing XIs to be announced.

The 3rd game of the 3-match ODI series between India Women and South Africa Women will be hosted by the Reliance Stadium in Vadodara.

India Women have already sealed the three-match ODI series and will be looking to keep South Africa winless in the series. The second match saw the visitors putting up a decent batting performance after being invited to bat first. Riding on contributions from the experienced batsmen South Africa posted a fighting total of 247 runs for the loss of six wickets.

But even that score wasn’t enough for them to level the series. Half-centuries from Punam Raut and Mithali Raj followed by a blitzkrieg from Harmanpreet Kaur helped India chase down the total comfortably in the end. The hosts are also expected to give chances to the fringe players having already won the series.

The forecast for the match on Monday is absolutely clear. There is no chance of rain at all in Vadodara with the sun shining on the Reliance Stadium. The temperature is expected to hover around 29-33 Degrees Celsius during the game according to AccuWeather.

The pitch for the previous ODI was good for batting. There was something in it for both pacers and spinners. Interestingly, the ball came on to the bat nicely as the game progressed which led to India Women chasing down the total. Expect the team winning the toss to bowl first.

India Women’s top four batters Priya Punia, Punam Raut, Mithali Raj and Jemimah Rodrigues all have the ability to score big. Picking Kaur in your Dream11 Fantasy team is also a good option in case India bats first as she will finish the innings strongly.

For South Africa, Lee and Wolvaardt are top batters. Both of them can take the game away from the opposition and with less pressure, they might make it count. Sune Luus can also make an impact in the dead rubber. 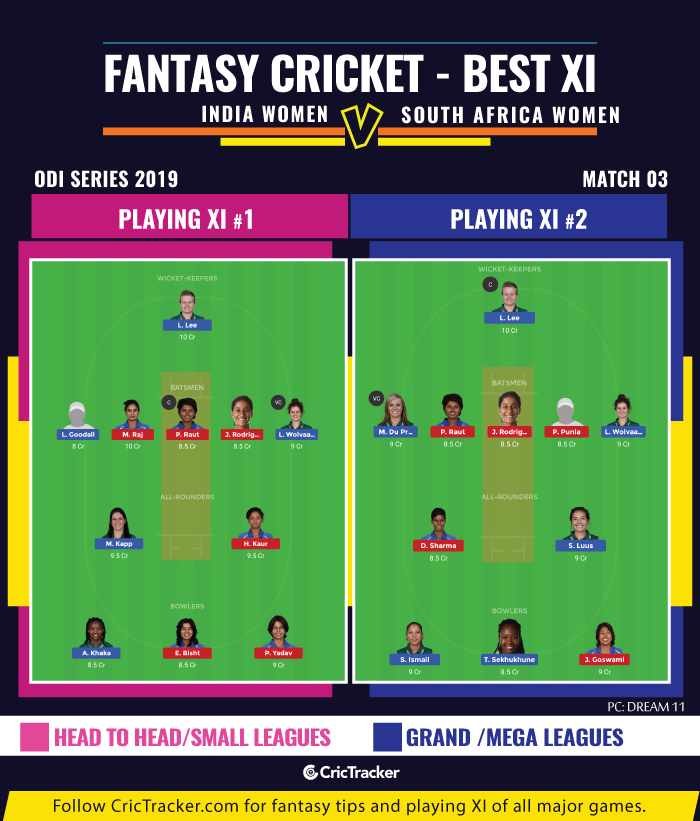 India Women generally tend to not play well in the dead rubber contests. Hence, making South Africa batters C and VC in grand leagues could be a great option in Dream11 Fantasy.