Mumbai has a better record over Chennai but who will win the tournament this time?

What transpired in the playoffs was long foreseen by a lot of people. Chennai will play yet another final – their 8th appearance in 10 tournaments. Out of these 8, their battle for supremacy was against Mumbai on 3 occasions off which they succeeded only once. Moreover, both sides have already collided thrice this year with Mumbai having a clean sheet which could make the great Buffon proud.

But Chennai have a knack of striking when the iron is hot; and boy, it can’t get any hotter. Can they get their acts together when it really matters? Or will Rohit’s skilful Mumbai prevail again? Either way, this contest might go down as one of the great ‘El-Classico’ battles when they go head to head at the Rajiv Gandhi Stadium in Hyderabad on Sunday.

It is the big finals and fantasy team decisions couldn’t be any tougher. Pandya, Pollard, Rohit, Dhoni, Watson. That is a very elite list but you have to stick to a budget, don’t you? Given Watson’s recent form, he is a dangerous player and worth a punt. Pandya has been sublime all season. And Dhoni never stops writing the scripts.

These three are likely to be the hottest picks as far as this game is concerned. Picking a couple out of Chennai spinners will be prudent. Prediction wise, cricketing logic gives Mumbai the edge. But Dhoni’s Midas touch cannot be ignored. This or that, a high-scoring humdinger is on the cards.

Captain: It is never a matter of playing a long innings for Pandya. It is the impact he leaves on the game which goes a long way in deciding the outcome of the match. In 14 stints with the bat this season, Pandya has clobbered his way to tally 386 runs at 48.25. His strike rate of 193 is only behind Russell this year. His utility with the ball as well as outstanding fielding makes him a must pick in this summit clash.

Vice-Captain: Tahir’s consistency has been remarkable this year. He has a golden opportunity of toppling Rabada from the top of the leading wicket-takers chart as he is only a solitary wicket behind the South African’s tally of 25 wickets. His control in the middle overs and battle against Rohit Sharma will be a delight to watch.

Harbhajan Singh is known to raise the intensity in knockout games. He will yet again open the bowling and has done reasonably well in that role. Having dismissed de Kock in both side’s previous game will give him confidence.

It is the big final between Chennai and Mumbai, play Dotball Fantasy and make it big! 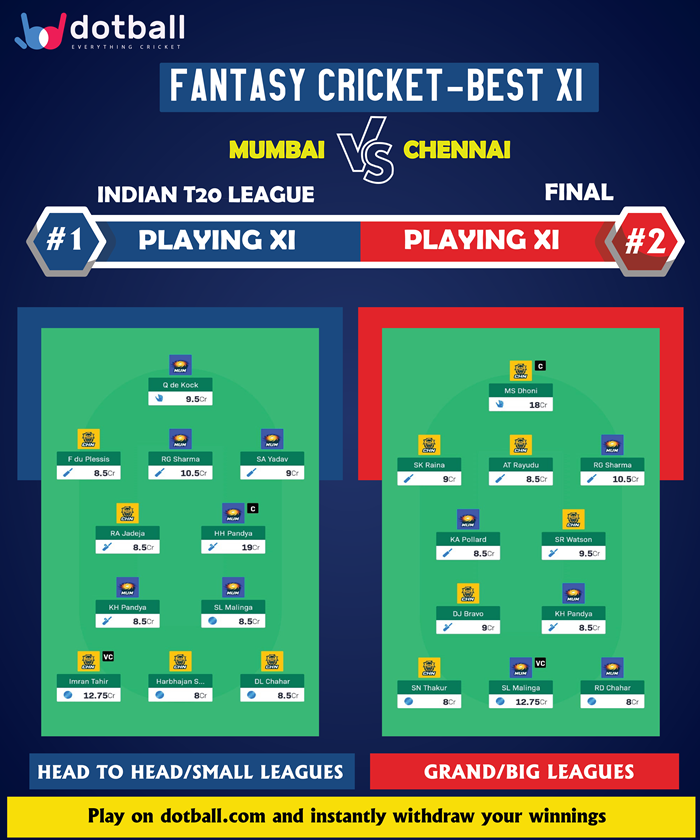 Captain: After 11 digs in the middle this season, Dhoni’s average is in the north of 100. Yes, you read that correct! His role with the bat has carried Chennai all the way to the finals. With Chennai’s top-order performing better, Dhoni will be an even more dangerous player down the order as he can capitalise on a solid platform better than most players in the world.

Vice-Captain: Malinga’s economy rate has suffered no end but his wicket-taking ability has remained intact which has brought him 15 wickets in 11 games. His presence has shouldered support to Bumrah during the death. Can he stop Dhoni? Well, in the past, he has. Big players are known to raise the bar in big games.

Rahul Chahar has wheeled away efficiently for Mumbai all season and is one of the reasons for the team’s success throughout the tournament. The form that he is in at the moment, he will exploit any assistance from the Hyderabad pitch and play a pivotal role in Mumbai’s march for a 4th title.

Play Dotball Fantasy for the final of the Indian T20 League and stand a chance to win big!

Across all 12 seasons, Jadeja has never delivered better with the ball and that too by a fair distance. If the ball starts turning, Jadeja could prove to be a potent force. He can also gallop quick runs at the end. 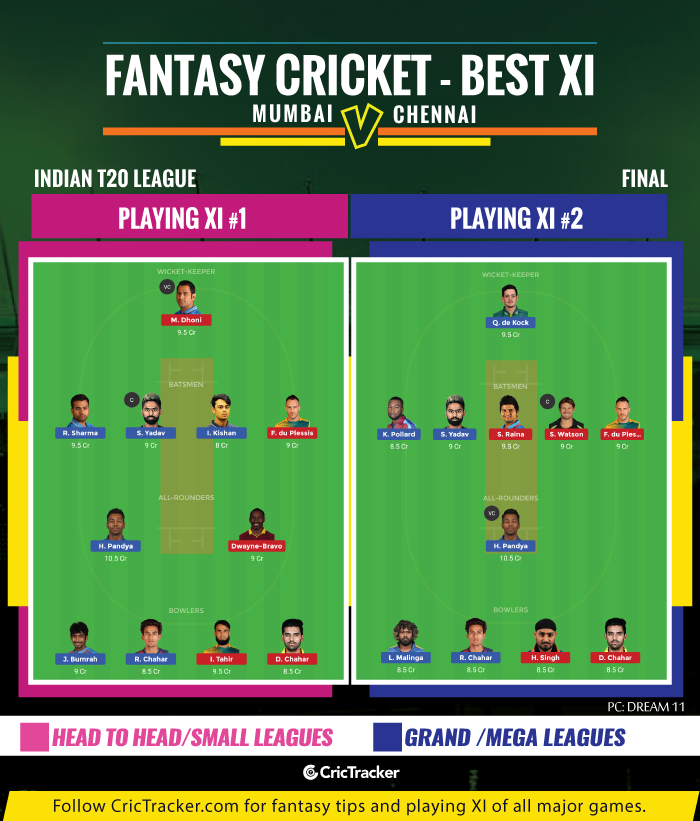 Bravo has quietly gone about his business but has yielded the right results for his team with the ball. With the bat, he hasn’t been used much. His experience and dual ability makes him an important player who could collect decent points on the big day.