Here’s all you need to consider before picking your team on Fantain Fantasy Cricket.

India is down with Indian T20 League fever once again as the defending champions, Chennai begin their title defence against zero-time winners, Bangalore on Saturday. Virat Kohli’s team will be entering the tournament with renewed hope to finally end their trophy drought, while MS Dhoni’s side will look to become the first team with four trophies. Here’s all you need to consider before picking your team on Fantain Fantasy Cricket.

Faf du Plessis and Imran Tahir will be unavailable for the first match due to international assignment. Ambati Rayudu and Shane Watson could be thus seen opening the batting. With the likes of MS Dhoni, Kedar Jadhav and Suresh Raina, the team’s middle-order looks as formidable as ever. Dwayne Bravo is their best bet for an all-rounder, while Ravindra Jadeja, Imran Tahir and Shardul Thakur are expected to provide the team crucial breakthroughs. While playing at home, Chennai have a success rate of 66.67%, something that they take strength from.

Bangalore franchise will be desperate to return the love of their fan’s this year, who have filled the Chinnaswamy stadium to its capacity each year despite the team disappointing them. Much of the batting onus will lie on captain Kohli and Ab de Villiers, while equal responsibility will have to be shouldered by Parthiv Patel and newcomers Shimron Hetmyer and Shivam Dube, both of whom are big hitters of the ball.

Expectations will be high from Umesh Yadav, who 20 wickets for Bangalore last season. But since the Chepauk pitch is spin-friendly, Yuzvendra Chahal could emerge as Kohli’s go-to bowler. Local boy Washington Sundar is also most likely to be included in the XI and should be on your Fantain XI.

Virat Kohli – The hungriest a batsman can get for runs, Virat Kohli is the key to their batting. This season, his burden is likely to be shouldered by a stronger looking middle-order.

Shane Watson – Shane Watson is coming into the tournament on the back of a successful season at the PSL. Once he settles on to the pitch, there is no stopping the Australian batsman from scoring in plenty.

Yuzvendra Chahal – Among the top 10 wicket-takers at the ground, nine of them are spinners, which is why Chahal is expected to play a bigger role than Umesh Yadav in this game and should be in your Fantain XI. This tournament gave the leg-spinner an opportunity to play for India, and he would now be hoping to put his international experience to the best use for Bangalore.

Shimron Hetmyer – Hetmyer is a power-hitter and on his day can start an onslaught against any bowler at any venue and on any type of pitch. Being touted as the team’s hottest property for this season, he can replicate Glenn Maxwell’s performances for Punjab in the 2014 edition of Indian T20 League.

MS Dhoni – Dhoni’s T20I prowess may have shrunk, but his value in T20 franchise cricket still remains high. Chennai’s adopted son, Dhoni has delivered quite a few memorable innings at the venue and will be looking to start the season with a bang. 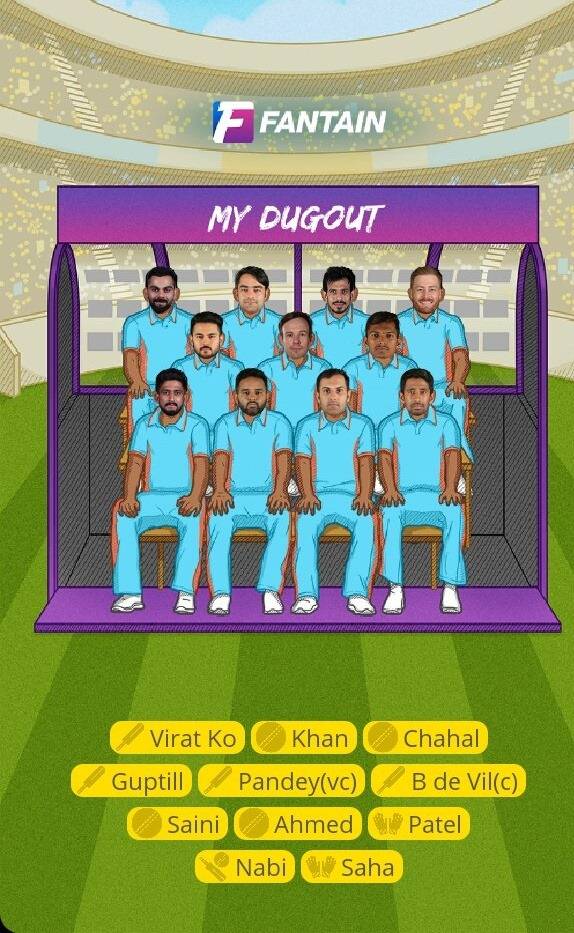