New Zealand players Southee, De Grandhomme and Santner, if they play, might struggle due to jetlag as they will arrive only ahead of the match.

The 12th edition of the Indian Premier League (IPL) will get underway with a South Indian derby. The defending champions Chennai Super Kings (CSK) and the Royal Challengers Bangalore (RCB) will face-off in the season opener. MS Dhoni and Virat Kohli, the captains of the respective teams, are pitted against each other in what is expected to be a grand start to the much-awaited tournament.

Just ahead of the tournament, the CSK have been jolted with a blow thanks to an injury Lungi Ngidi who has been ruled out of the whole season. They haven’t named a replacement for him yet and will be short of a quality overseas fast bowler for this game. The Men in Yellow though are capable enough to make it up with the quality players they possess in the squad.

The RCB are once again up for another season with the hope of making it big. Like every year, they have some of the stars in the international arena and local talent as well. But the team will be deprived of Marcus Stoinis’ services who is currently in the UAE involved in the five-match ODI series against Pakistan. The onus will be primarily on Kohli and AB de Villiers again to get the team off to a good start this season.

The first game of the IPL between CSK and RCB will be hosted by the MA Chidambaram Stadium in Chennai.

The game will be live on Star Sports in India. (Live streaming on Hotstar)

Chennai is known to be humid and it will take a toll on the players. The temperatures will hover in the early 30s during the match and there is no possibility of rain at all.

Note: Faf du Plessis can be best utilised at the top of the order. But with Dhoni likely to bat at four, Rayudu can’t be moved down the order to accommodate Du Plessis.

Note: Moeen Ali opening the innings will help RCB in adding an extra batsman or all-rounder. Also, Moeen Ali can attack in the power-play and score quick runs.

There is no news about Mitchell Santner joining the CSK as of now.

New Zealand players Tim Southee and Colin de Grandhomme are expected to join the RCB camp only ahead of the game.

He was the only player with 400+ runs in the PSL this season. 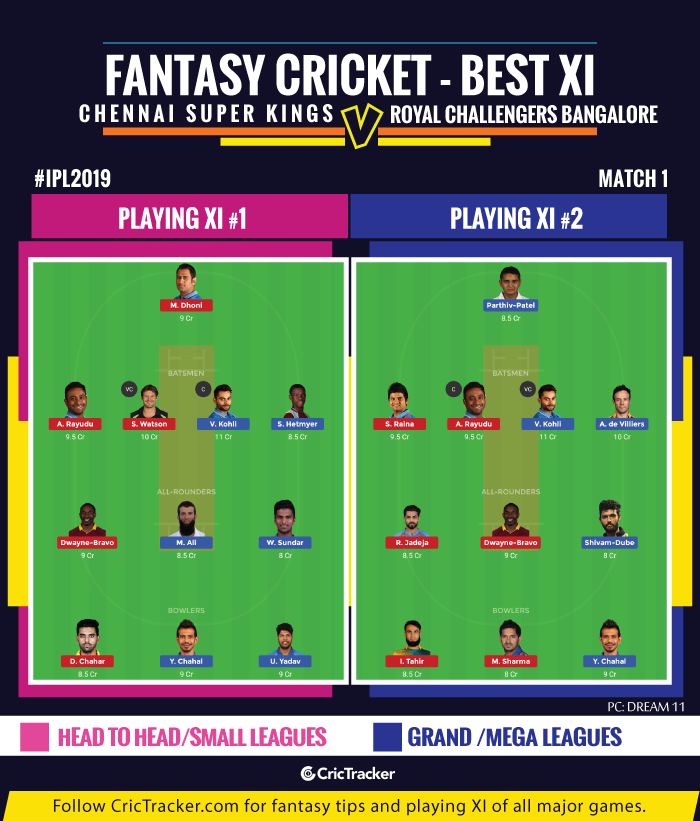 Only two of Kohli, De Villiers and Shane Watson can be picked due to their high credits. Kohli cannot be ignored and De Villiers might struggle early on in these conditions.

CSK, playing at home, have the advantage to take the early honours but one can never predict how RCB will play.