Delhi will be confident after their super over win over Kolkata while Punjab also beat Mumbai.

This is a heavyweight clash in terms of batting prowess but fresh off an impressive win against Mumbai, one might think that it is Punjab who are punching above their weight. However, Delhi, who survived a thriller and a scare against Kolkata in a match that went down to the Super Over, look to be bettering their team chemistry with every passing game.

Delhi did have their dodgy moments in a big chase they had under control against Kolkata failing to score the 6 runs needed from the last over but Kagiso Rabada’s Super Over heroics must have given them immense confidence despite a tiring outing. Punjab though look quite formidable in their own right with David Miller and Andrew Tye back in the fold and giving them more flexibility and options. It is going to be a fascinating battle with almost equivalent amounts of batting and bowling fantasy points on offer. Backing the Delhi batting to come good again might be a good call.

Conditions: Another batting beauty is in the offing with dry and placid conditions that should make life difficult for the fast bowlers.

Injury updates: There don’t seem to be any injuries and both teams are likely to be at full strength.

Ravichandran Ashwin: He will bowl at the start of the innings and invariably picks up a wicket or two which makes him a valuable pick regardless of the match situation.

Mandeep Singh: Punjab’s middle order ace will have a central role to play in building the innings or giving it a flourish of a finish depending on how the top order plays, but he definitely is going be in the thick of the action.

Kagiso Rabada: His super Super Over on Saturday night reminded everyone that no matter how placid the conditions seem there is nothing to match the lethal force of a 147kph yorker. Rabada’s disciplined bowling and his knack to knock batsmen over might be the difference maker in this match.

Chris Gayle: He has been in sizzling form-defying both his age as well as the law of averages and is always good for a strategy punt in a fantasy team. His hitting prowess is no secret – he became the first player to 300 sixes in the league when others aren’t even at 200 yet. However, it also comes with the downside that he may just fizzle out too quickly.

Chris Morris: The South African all-rounder is back for Delhi and his presence strengthens their lower order batting as well as bowling. Morris has the ability to pick wickets at the death, and that’s something you can wager on by picking him as the captain.

Sarfaraz Khan: Since his impressive opening game knock Sarfaraz Khan hasn’t really set the league on fire but he has looked much improved and appears primed to play another key knock if he gets some time out there in the middle.

It’s likely to be a match where Delhi’s experience in the form of Shikhar Dhawan and the like and the exuberance in the form of Prithvi Shaw and the like is going to dominate Punjab’s ordinary bowling attack, so be careful about placing too many fantasy eggs in the Punjab bowling basket. If you have to pick bowlers, err on the side of caution and back the ones from Delhi, not just frontline ones like Rabada but also the spinners including Hanuma Vihari.

The Prediction: Given that their specialists are executing their roles to perfection Delhi will start as favourites, their bowling giving them an important edge in a battle that will otherwise rest on the top order batsmen. 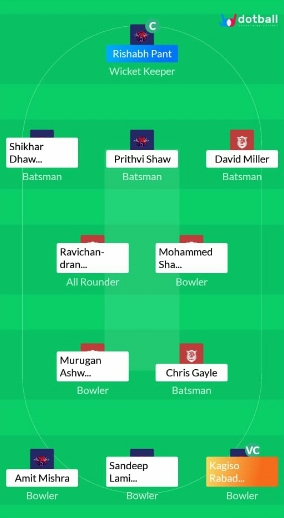 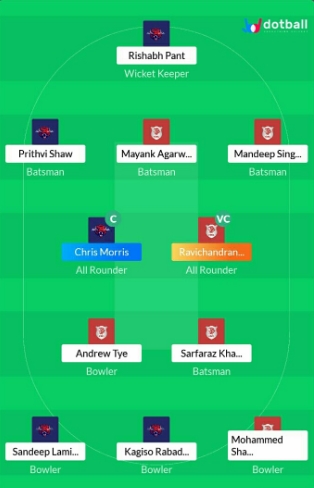