It is a crucial game for both the teams before it is a bit too late for them to get a win.

The 2019 league campaign has gotten off to a disastrous start for both Rajasthan and Bengaluru, the two teams who clash in Jaipur on Tuesday. They have lost all the games they have played and while Rajasthan can count themselves a bit unlucky, Bengaluru have struggled to put up a fight, suffering embarrassingly bad defeats in their away games. Rajasthan’s bowling has struggled to find rhythm and their batsmen have twice botched positions of strength in a chase.

Bengaluru’s big guns haven’t really fired so far but more disappointingly, the rest of their arsenal has been a damp squib too. They are yet to settle on an opening pair and bar Yuzvendra Chahal, their bowling has lacked any set plans. Beleaguered as they are, Bengaluru look like the team who will be the only one winless after this game.

Conditions: It should be good batting conditions at Jaipur where the track usually favours the slower bowlers just a little bit as long as there isn’t too much dew around.

Injury updates: There aren’t any injuries.

Virat Kohli: The captain is under pressure with his team slipping badly but his touch seems intact and he will want to spend time in the middle as the World Cup approaches. Kohli might even open if it is a steep chase and that could be a major fantasy points opportunity.

Yuzvendra Chahal: He has a certain fearless quality about himself, willing to concede a few runs if that means a better chance to take a wicket. That is exactly what makes him a prolific bowler in this format. In the carnage that was the 217 Rajasthan put on the board in Bengaluru last season, Chahal stood out with 2/22 off his 4 overs.

Sanju Samson: He was the first to three figures in this year’s league although he ended up on the losing side, Sanju Samson is enjoying a good run of form which is evident from his strokeplay and confidence. The conditions suit his style and he is likely to feast on the ordinary Bengaluru bowling.

Ben Stokes: Stokes couldn’t quite deliver the killer blow in Chennai but as an all-rounder remains an ever-present double threat.
Jofra Archer: Once again, similar all-rounder chops might even see Archer open the innings (always a points possibility) but his bowling so far this season has been the one bright spot for Rajasthan.

AB de Villiers: The South African hasn’t looked fluent like he usually does, but he did get a decent look in at Bengaluru and a listless Rajasthan attack might just be the feast he needs to get back to his prolific self. His innings in this encounter in 2018 almost singlehandedly carried Bengaluru to victory before a late collapse.

Bengaluru’s power-packed batting squad including skipper Virat Kohli, and of course, AB De Villiers might look infallible on paper but has failed both times away from home. With them also lacking a finisher, it might be better to repose your faith in Bengaluru’s bowling in general and Yuzvendra Chahal in particular. Meanwhile, watch out for Steve Smith; it is possible he might be dropped in favour of someone like an Ashton Turner after his outing at Chennai.

The Prediction: At Jaipur, the teams have clashed six times with them sharing 3 matches apiece. It is usually a moderately high scoring affair (~8/over is the typical run rate) but with the form Rajasthan’s batsmen are in, they look favourites to win a middling affair. 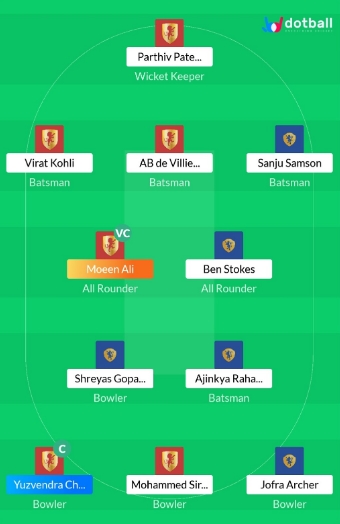 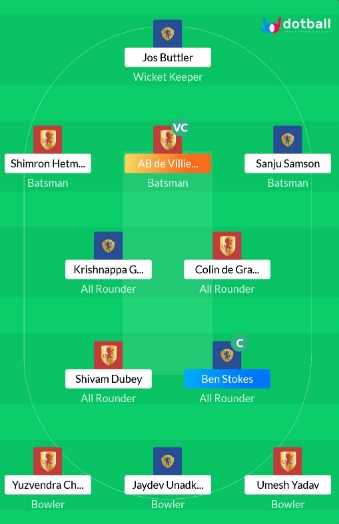