All that you need to read before picking your Fantain XI for Delhi vs Hyderabad.

Hyderabad will travel north to take on Delhi at the Feroz Shah Kotla in 16th match of the Indian T20 league 2019. Sunrisers enter the match as strong favourites; Delhi, even after a change in their names, haven’t seen a reverse in their fortunes yet. Delhi’s lower order has been disappointing, while Hyderabad’s openers have been in sensational form. Let’s take a look at both the sides before you pick your Fantain XI for Delhi vs Hyderabad match.

Delhi dropped Amit Mishra for Avesh Khan in the match against Punjab, a decision which backfired as Avesh conceded 30 runs in his three-over spell. Expect Mishra to return for this game because the Kotla pitch is spin-friendly.

It is unlikely that Hyderabad will want to tweak their winning combination from the previous game, but Bhuvneshwar Kumar’s unimpressive bowling in the death overs might be concerning them.

Shikhar Dhawan, who was traded by the Hyderabad team at the auctions, will face his former team as a Delhi batsman for the first time this season. Dhawan has not done anything exceptional in the tournament so far, but expect him to come good against the Hyderabad bowlers, with whom he has worked closely.

The opening batsman has been in the form of his life ever since returning from a one-year ban. He has already piled up 254 runs in three matches so far, and can get you a lot of points on your Fantain XI.

Although the young batsman was dismissed for a golden duck in the game against Punjab, he is big hitter of the ball and can score some quick runs and get you points in your fantasy game. He previously scored an unbeaten 99 against Kolkata.

An efficient all-rounder, Nabi’s 4-11 propelled Hyderabad to a fancy win over Bangalore in their previous encounter. The 34-year-old was benched for most of the 2017 and 2018 season, but will be utilised to the maximum this year.

Rabada proved his destruction level in the Super Over against the Kolkata team, and could well replicate that performance against Hyderabad. 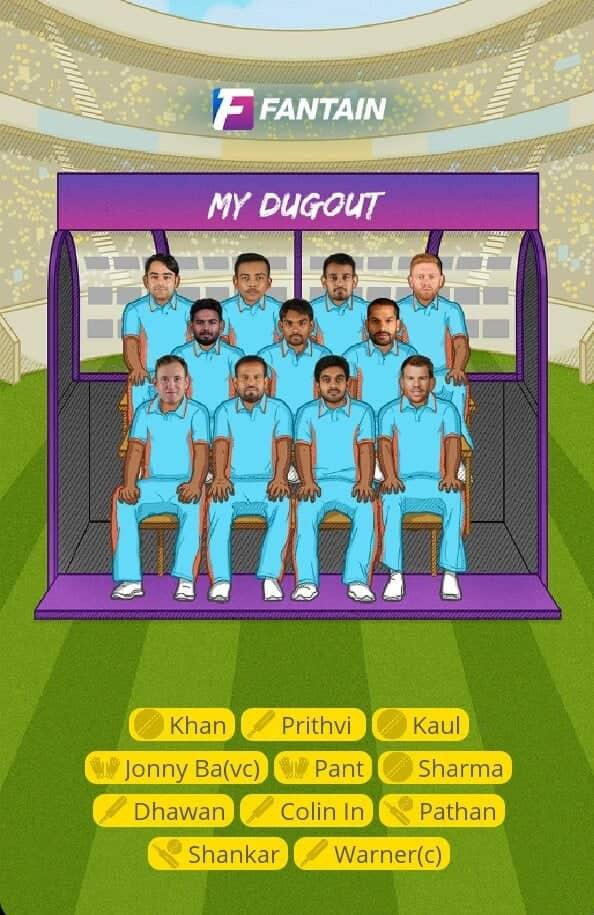