Both teams have had contrasting seasons thus far.

If we go purely by the numbers this season, this contest is a mismatch. Rajasthan have won only a solitary game out of 5 while Chennai have lost only once in 6 games and currently hold the top spot in the points table after their easy 7-wicket victory over Kolkata which subsequently dislodged them from the top. But Rajasthan ran Chennai very close and were only 8 runs short of the target of 176 when they faced them in their away leg a few days ago. It could be an interesting contest when Chennai play their away leg against Rajasthan in Jaipur on Thursday.

Every fantasy team user must try to accommodate as many bowlers from the Chennai team as possible due to their outstanding performances this year which culminated into restricting the powerful batting line-up of Kolkata for only 108 for 9 in their previous game. The pitch at the Sawai Mansingh Stadium offers a level playing field for both batsmen and bowlers. The slow bowlers have a role to play in the second half of the innings but smart batsmanship can keep them at bay. The likes of Harbhajan Singh, Imran Tahir, Shreyas Gopal and K Gowtham could play pivotal roles for their respective sides.

Injury Updates: Apart from Bravo, who picked up a hamstring injury, no niggles in both camps.

Captain: Barring two single-digit outings this year, Shane Watson has always appeared to look in good form at the top of the order. The former Australian allrounder doesn’t look too far away from a game-changing inning. Having played for Rajasthan for a few years, he must know a thing or two about this ground as well. With the surface offering assistance to the bowlers, Dhoni could also use Watson’s military medium seam ups and cutters.

Vice-Captain: 5 out of 26 wickets (19.23 %) in Gopal’s IPL career have been wickets of Virat Kohli and AB de Villiers – two of the greatest white-ball players of all time. This statistic is enough to have Gopal as the vice-captain of your fantasy team. His wrong ones are hard to pick and could force the likes of Dhoni, Rayudu and Jadeja into submission.

Deepak Chahar has smoothly taken over the responsibility of bowling at the death in the absence of Bravo. 8 wickets off 6 games at an economy rate of under 6 speak volumes about the young pacer’s form and confidence this year. Faf du Plessis didn’t take much time to get into his groove and looks good to extend his run of form. 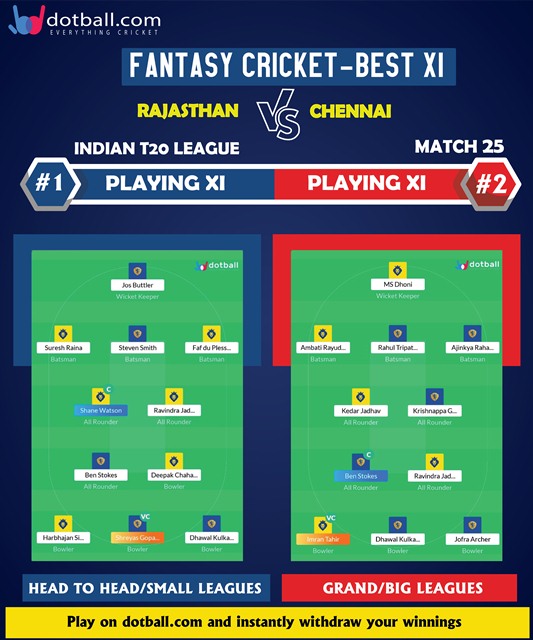 Captain: Against the general consensus, with a strike rate in the north of 135 and economy rate of 8.10 in his IPL career, Ben Stokes hasn’t done badly in the IPL. In Rajasthan’s previous encounter against Chennai, Stokes batted with a man of mission but failed to take his side over the line even with a sparkling 46 off 26. Since then, he hasn’t been dismissed and haven’t gotten enough opportunities to showcase his talent. The Englishman might just get his chance on Thursday.

Vice-Captain: At 40, Tahir is maturing like old wine – Dhoni summed up Tahir’s golden run so far this season after the South African produced yet another match winning performance against Kolkata picking 2 for 21 and taking his tally to 9 wickets from 6 games this year. His economy rate of 5.36 is currently the best in the league for anyone who has bowled more than 100 balls this year. Tahir will relish bowling at Jaipur and looks more than likely to continue his golden run.

Jofra Archer (2 for 17 & 24* off 11) had a dream game when both sides met the last time and will take immense confidence from that. It is about time that Rahane gets a decent knock for his team and get back into some kind of form.

Jos Buttler has registered 3 scores of 30 plus out of 5 games this year. His current form and success at the Sawai Mansingh Stadium make him a hot candidate to make a huge impact in this clash. Steve Smith got himself into some kind of form with a steady 73* and will want to carry on and turn his side’s fortunes.

Jadeja has quietly gone on to deliver good performances for Chennai picking 5 wickets after bowling 20 overs at an economy rate of 5.60. He looks likely to get a chance to contribute with the bat as well in this game. With the World Cup selection looming large, Rayudu will be keen to play an impactful knock to push his case. 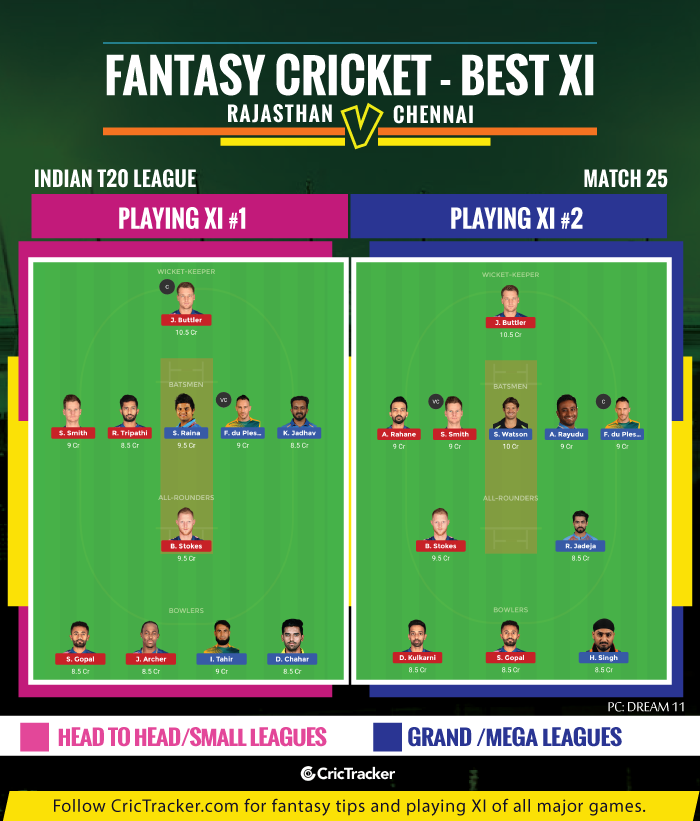