All that you need to read before picking your Fantain XI for Mumbai vs Rajasthan.

The Indian T20 league is now heading towards its third week, with the weekend’s first encounter being a doubleheader between Mumbai and Rajasthan. Mumbai are currently on a winning streak as they have won all three of their previous games, while not much has gone right for the Royals this season. Their last match too was a last-ball loss to Chennai at home.  Here is all you need to read for both the teams before you pick your Fantain XI for Mumbai vs Rajasthan.

Mumbai will be coming into this game after winning three back to back matches, which is why they most likely will not tweak their playing XI. More so, because they are a different kind of beast at home.

An unfit Sanju Samson had returned for Rajasthan in their previous game. Ajinkya Rahane does not have too many good options in his bench strength to choose from.

Ajinkya Rahane – The skipper of the Rajasthan team has not enjoyed a decent success with the bat so far, but given that Wankhede is his home ground, and that he has played domestic cricket here for years, he may make the best of his better understanding of the pitch. He may not be a T20 power hitter, but Rahane can get you some crucial points on your Fantain Fantasy XI.

Kieron Pollard – After Pollard’s performance against Punjab, his stocks have risen across fantasy platforms. Pollard smashed 10 sixes as he scored 83 runs to snatch away the game from the hosts. The small Wankhede pitch may see another of the West Indians’ big innings.

Jofra Archer – The fast bowler was the best bowler for Rajasthan in their previous match against Chennai. With a single wicket, he gave 19 runs in his four overs. His pace is his biggest weapon, with which you can earn some points on your Fantain XI.

Alzarri Joseph – Given the kind of debut the Windies fast bowler had, he has become a must on your Fantasy XI. He did not enjoy much success against Punjab but will be looking to bounce back in form against Rajasthan.

Shreyas Gopal – Gopal has been one of the better bowlers for Rajasthan this season, though not consistently. If he finds the right tricks for the Wankhede pitch, the hosts could be in a spot of bother. 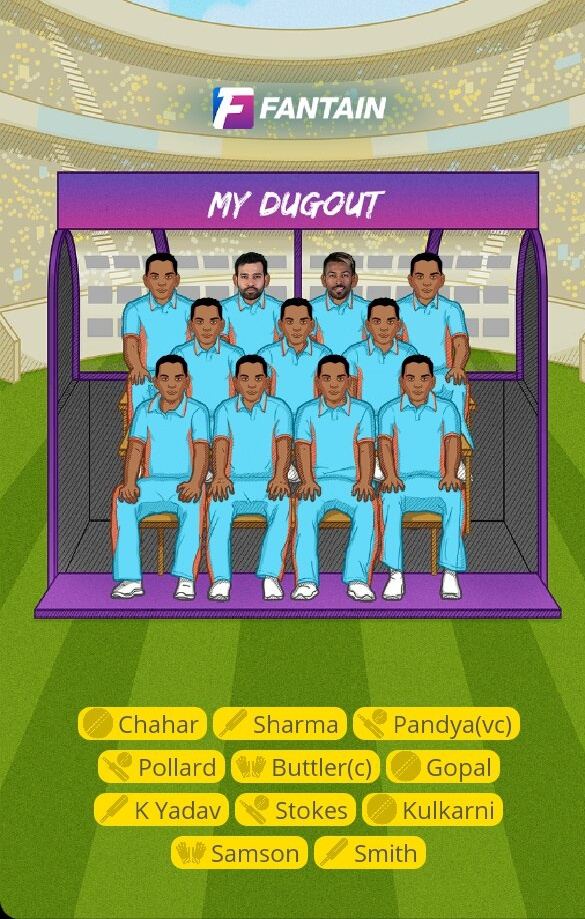